Moving in Nairobi: Driving an Uber

This is the final installment in our Moving In Nairobi series. In these articles, we’ve explored the complexities of moving in Nairobi through the eyes of four commuters as they walk, ride motorcycles (boda boda), take buses (matatu), and drive Ubers. Three and a half million people move through this East African capital every day, and the lack of coordinated transportation planning often causes the city to grind to a halt. Our final story is of Kate Nancy Wanbury, who drives an Uber in the Kenyan capital.

Driving an Uber in Nairobi often means long, grueling hours on the road, and for Kate it’s no different. Morning traffic heading into the city from its suburbs can be so bad that she often can only complete one trip, picking up one passenger in the early morning and dropping her off hours later after slogging through a traffic jam.

Most of the time, Kate carries passengers from CBD to the western neighborhood of Kilimani and Karen. Although Ngong Road offers a direct connection to these areas, this road is often overcrowded with both matatus and private cars. In order to make the commute more pleasant to her customers, Kate has a wide variety of charging cords for her clients’ phones, so they can listen to music or watch videos on YouTube. 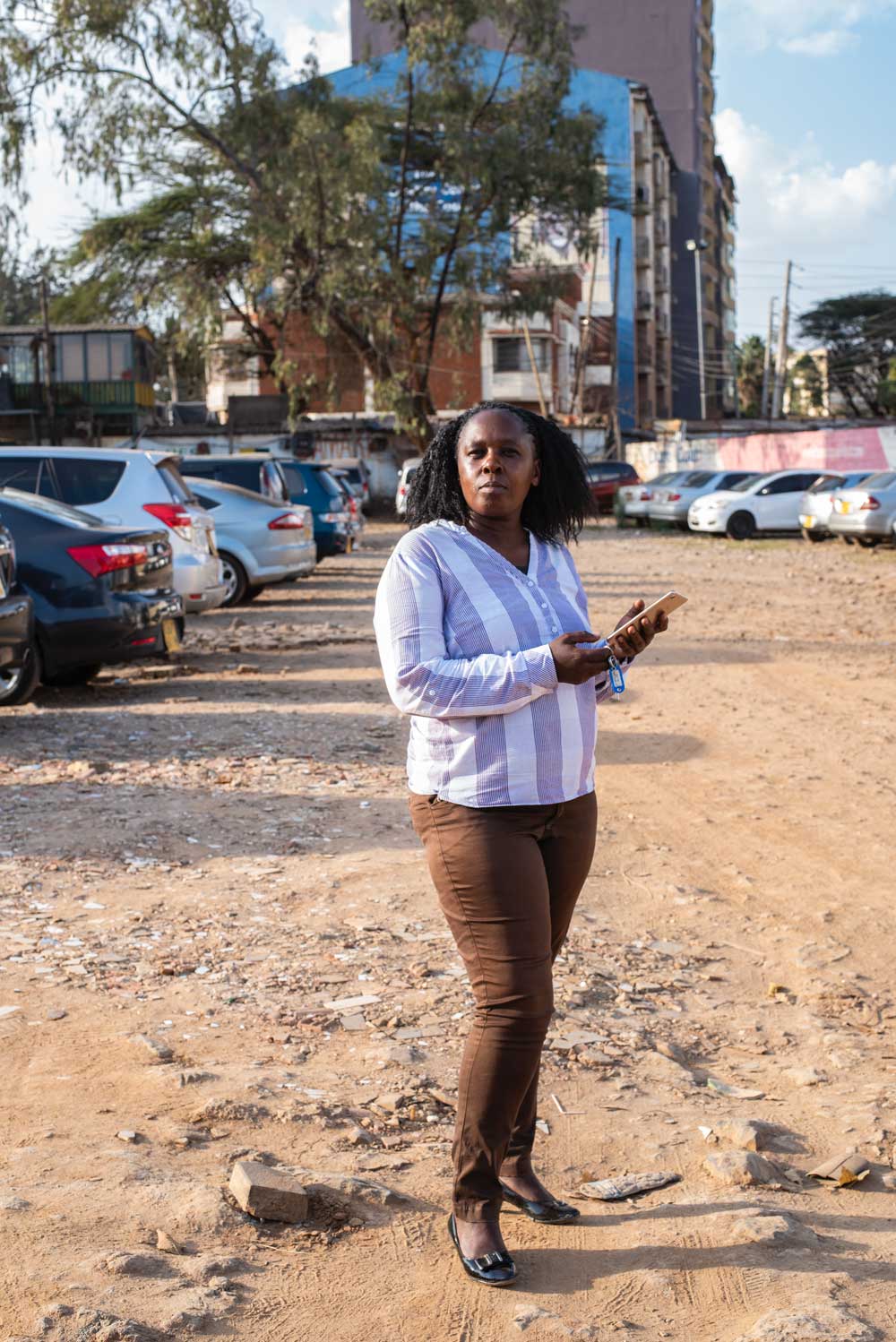 Apart from the health and environmental concerns around engines idling in traffic for hours, there are also financial concerns: with so little passenger turnover, Kate can work 10-hour days and earn as little as $5. In March 2017, drivers protested against Uber and the low fares that prevented them from making ends meet and, after years of price cuts to keep their service competitive with other companies, Uber responded with a minimum fare increase from $1.94 to $2.91. However, just months later in May, Uber slashed prices again by introducing a cheaper service called UberGO. The minimum fare for this service is just $1.45.

“Because of Nairobi’s terrible traffic, I can only complete one Uber trip in the mornings. This is about 250 Ksh (2.5 USD) for five hours of work.”

Just months after the launch of UberGo, the company introduced an even cheaper service called Uber Chap Chap. Chap Chap, Swahili slang for “hurry, hurry,” is made possible by a deal with CMC Motors, a Kenyan car importing company. Through this partnership, Uber was able to acquire 300 Suzuki Altos, a functional and inexpensive sedan and offer them, with financing, to highly rated drivers. The minimum cost for a ride, just 99 cents, is possible because the Altos are about twice as fuel-efficient as the average UberX, at 58 miles per gallon.

Uber is not alone in slashing prices. The company’s two major competitors in Nairobi, Bolt and Little, have also been cutting rates in the past years, as a way to differentiate themselves in this competitive transit market. But lower prices for riders means lower profit margins for drivers. Uber Chap Chap was initially intended to operate only in the Central Business District and its immediate surroundings; since its launch, however, it has expanded its services to include most of Nairobi. While drivers were able to make a decent wage on the low-cost service with short rides, longer rides across town slash their profit margin to almost nothing. And what Uber does, so do its competitors. All three major ride-hailing services have either introduced cheaper services or have brought minimum prices down to remain competitive. Throughout 2018 and into 2019, drivers have protested these price cuts, calling for ride-hailing companies to remove their lowest-cost services and for the government to step in and protect local drivers from the exploits of foreign-owned firms. 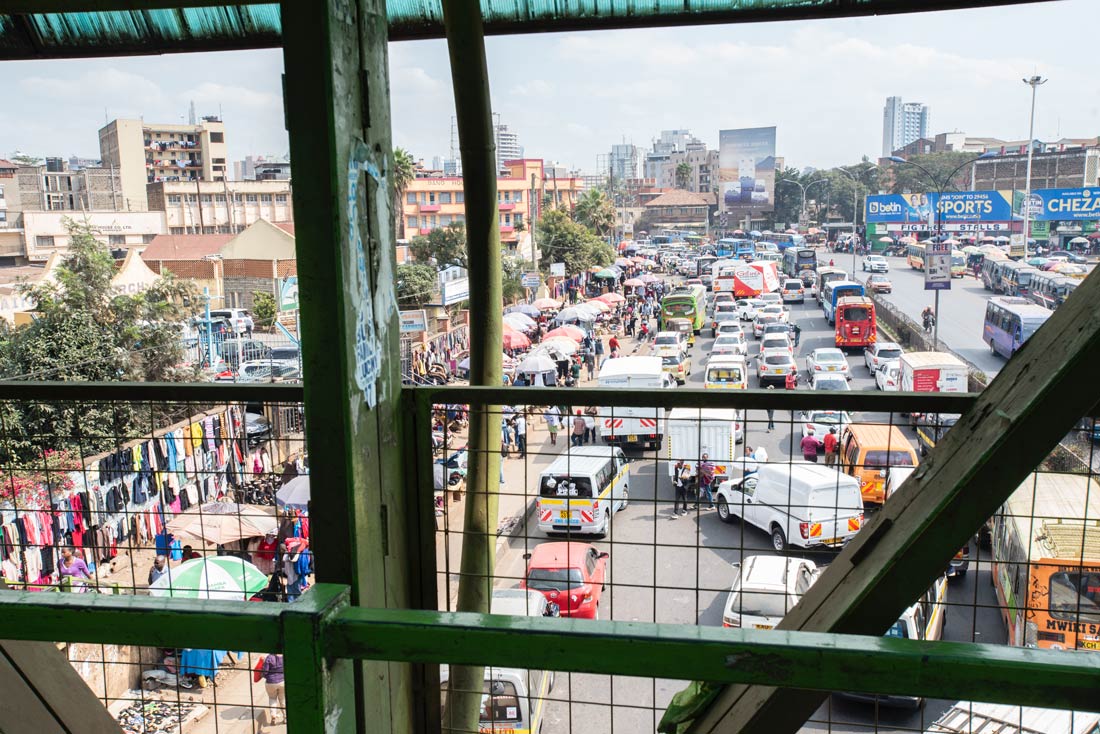 In bids to attract drivers and differentiate themselves in a crowded field, all three companies have developed services and perks for their drivers and riders. Bolt, acknowledging the intense pollution that comes from private car ownership in Nairobi, is committed to moving away from the use of vehicles with combustion engines and toward electric vehicles. They have launched an electric scooter service within the same app as their ride hailing service and will soon add other electric and public-transit-oriented services in the coming years. Little focuses its efforts on small perks that have a big local impact. Thanks to a partnership with mobile operator Safaricom, Little’s service is available to users who do not own smartphones, which expands their pool of potential riders considerably and brings a useful service to those without smartphones. Little also offers their drivers traditional employment benefits like healthcare and discounted mobile phone service.

Uber has pioneered a program that helps their drivers buy their own cars: the company helps drivers secure car loans, with an agreement from the drivers that they stay with the company until the loan is paid off. Paying off a loan typically takes three years. However, Uber has run into some problems with this program, as this type of loan is not common in Nairobi, and many drivers do not understand that interest rates make the car cost more money and are not familiar with the consequences for not making payments on time. Moreover, many Uber drivers did not have a bank account before driving an Uber. Uber has found themselves developing classes to teach drivers about banking and loans, but still, the lack of knowledge about basic banking practices has created setbacks for some drivers who now feel the pressure of paying back their loan in a market flooded with competition.

While Uber is controversial, most drivers will stay with the company, despite the brutal traffic and the low wages, because it allows for more freedom and flexibility than most other transportation jobs in Nairobi. Kate makes up a small percentage of women Uber drivers who have picked up the work as a way to make extra cash while their children are in school. Safety is a concern, and Kate says she rarely picks up passengers in the evening, but for now it provides a little extra cash in her pocket.