This research is an excerpt of Terra-Sorta-Firma by Fadi Masoud, published by Actar Publishers

Coastal land reclamation is one of the primary forms of global urban expansion. China is home to the world’s largest reclamation projects: over the last 50 years it has reclaimed 13,380 km2 of land and expanded its coastline by almost 2,000 kilometers. This atlas showcases a range of coastal urban developments built on reclaimed land and how they change over time.

Data visualization from The Littoral Gradient Atlas by Fadi Masoud

With advantageous geographic locations, copious economic opportunities, and large influxes of floating population, Chinese coastal cities have been regarded as a site for opportunity. They have been planned as engines for local, regional, and national economic development and as global cities of the future. New developments in coastal cities have been bolstered with tremendous optimism. They are envisioned as the seed of a futuristic world, featuring new towns, new central business districts, ports, resorts, industrial parks, urban parks, and natural systems. Sustainability is supposedly achieved by building anew on artificial terrain and equipping the new city with the most advanced technologies. In reality, we have witnessed vast areas of undeveloped reclaimed coastal lands that have replaced dynamic ecosystems and are waiting for speculative developments to commence.

The world’s largest reclamation project received investments upwards of $100 billion through bank loans, yet today stands as a ghost city far from its 1 million planned population. An analysis of channels blocked through early stages of Caofeidian’s reclamation highlights the decline of flow and velocity of tidal currents and the increase of siltation. This morphological change is also accompanied by heavy metal contamination in Caofedian top soils because of the development’s industrial activity zone. The cost of the reclamation, its maintenance and defense, has not added up to the value of the original proposed master plan, leaving behind acres of empty undevelopable plots New Caofeidian remains a vast, exposed wasteland, where most of the hardware from the reclamation process remains in place. The massive tracts of land labeled numerically and sequentially referred to by their initial engineering coordinates are still awaiting investors.

Eco-cities were conceptualized to: alleviate poverty and social disarray, protect built and natural environments, establish equitable societal structures, and recently adapt to climate change. Tianjin Eco-city in Bohai Bay, China is intended to be a massive low-carbon living, working, and recreational project being built upon an industrial dumping ground of toxic waste. The remediation process involved the application of modern technologies to remove heavy metals while replanting and reforesting the abutting land to reestablish natural habitat. While this development was intended to be ecologically conscious, it disconnected and replaced existing villages from their their fishing grounds The assessment of Bohai Bay’s Northwest coast (where Tianjian is located) illustrates 910.7 km2 of destroyed coastal wetlands including intertidal beaches and island. “smart and eco city” developments because their small scale facilitates easy marketing of success and measuring sustainability dimensions. As Grydehøj & Kelman (2016) claim, they are often privilege of corporate over public interests highlighting iconic architecture that is un-replicable and unsustainable, hiding underlying unequitable practices and void of real sustainability because their overall intent is to monetize the environment.

Nanhui is an “eco-city” built on 35 miles of reclaimed land south of Shanghai. The scale of the development was grossly expanded to accommodate a large interior water body and green space, rendering a sprawled development with cars needed to reach all destinations. Designed by the German architects Gerkan, Marg and Partners, the construction of Nanhui City was rendered physically possible after a damn was built in 1997 along the Hangzhou Bay to trap sediment deposits and to facilitate land infill. Nanhui boasts radial patterning with waterways cutting through its artificial green spaces, reflecting “the human capacity to shape land.” The new city at the mouth of Yangtze and the Qiantang rivers today continues to face stabilization problems of erosion and liquification. Nanhui is a ghost town with limited inhabitants, despite thousands of people forced to relocate from surrounding lands. Nanhui was an estimated $7 billion development investment. 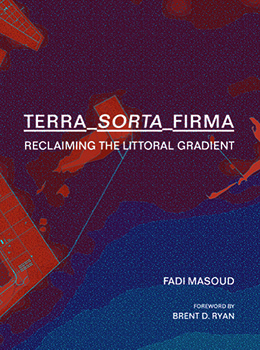 « The Icebergs and the Sea
The Widest Vibration »