On 09 April Future Gold Coast was officially launched and will be headed by Michael Roach. Formed from a conversation which spanned more than 12 months, Our Future Cities now comprises Future Cape Town, the founding movement, as well as Future Lagos, Future Johannesburg, Future London and Future Gold Coast.

The expansion to other cities has helped grow the Our Future Cities network. In 2014, more than 40% of readers were from outside of South Africa and over 74,000 social media followers follow the platforms. Other major activities have included operating creative spaces, producing an installation, participating in exhibitions, conferences and research.

Unpacking the addition of Gold Coast to the network, I had a conversation with Michael. You can also read the full press release here. 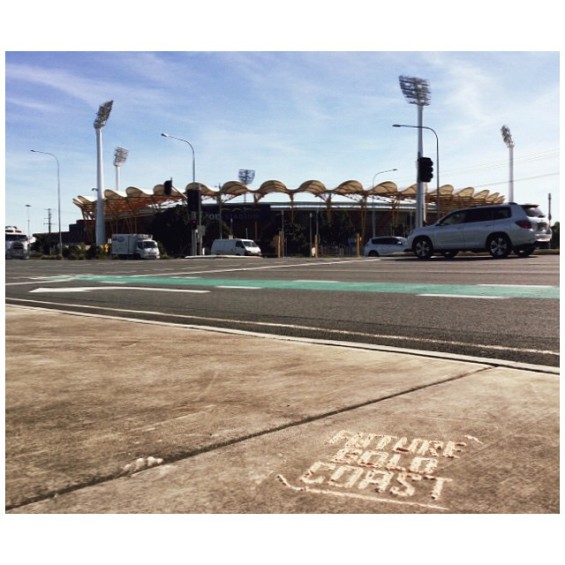 Rashiq Fataar: We are very excited to go down under, and to welcome to the family one of Australia’s fastest growing cities, Gold Coast. ‘Why Gold Coast?’ is a question I anticipate from our existing followers and friends. Tell us more about the city and why this moment in time is so prime to start a movement.

Michael Roach: Since Gold Coast is the host of the 2018 Commonwealth Games it creates a symbolic deadline to framing those discussions, content and ideas needed to shape the future of a vibrant city.

Gold Coast is the sixth largest city on the Australian continent, and in recent decades has been one of the fastest growing regions in Australia. The Gold Coast has a unique character and form, developing from a strip of coastal villages and towns into a 21st century urban region. The Gold Coast’s population will double by 2050 with two-thirds of the population growth expected to be accommodated within the current urban footprint. This set of challenges creates opportunity to drive positive change ahead of our time on the world stage in 2018.

RF: Australian cities are often listed as some of the most liveable in the world. Can you elaborate on what the main challenges are for Gold Coast?

MR: I rate the Gold Coast in terms of the health of its burgeoning communities. The intangibles that light up communities here, as well as the infrastructure that supports them. While arriving visitors discover a sun-drenched destination with over 300 days of sunshine, we are confronted with the growing pains of a developmentally driven city. The Gold Coast must now correct its disparate intra-regional connectivity and public transport and step out of its over-reliance on a service or construction economy.

RF: Gold Coast is the host of the 2018 Commonwealth Games, a significant mega-event for a city of its size. What has this event meant for the urban development of the city, and what are the key projects which can move Gold Coast into the future?

MR: The physical layer to this event is already making a marked impact. The redevelopment of Parklands, Southport for the athletes village is a large urban renewal project. There will also be further communications infrastructure and sporting infrastructure coming online, however what we won’t see is a wider urban renewal program taking place.

The city has tried, to some extent to balance long term urban regeneration needs with those of the event itself. The rest of Australia along with Future Gold Coast will be keenly looking at the positive economic impacts and signs of a legacy momentum. We urgently need to ensure an event legacy of new institutions, processes and activity that continues to bear fruit long after the event has moved on.

RF: How does your current work align with your vision for Gold Coast? What has inspired you about the city?

MR: Involvement with the buzzing local media, arts and culture industry here as well as being a business trainer for the local workforce keeps me finely atuned to the city.

The distinctiveness of Gold Coast is what drew me here over 11 years ago and in my view the coastal form is its biggest, most uplifting and memorable asset. A vision for Gold Coast is impossible without looking to its natural assets to shape and frame new development. In recent times this has seldomly happened, however, we are getting better at this in some cases.

RF: How can Future Gold Coast become a platform for dialogue in Gold Coast? Is this form of dialogue and critical observation missing in the city?

MR: Future Gold Coast can foster a sense of belonging and stewardship by residents. The thought provoking ideas coming from this platform will be a moving dialogue to challenge the status-quo and help the city to innovate and lead by example. I’m looking forward to a talking about those things that aim to explore and enhance the things that Gold Coast values the most.

« Our Future Cities
THE SOUTH OF NORTH DIALOGUES »

Founder of Our Future Cities

Future Cape Town is a leading platform in Africa promoting democracy about the future of cities.
Through our online presence, research, and multi-stakeholder collaborations we work towards expanding public access to urbanism in order to promote a more visionary and inclusive city. We are an independent think-tank, advocating knowledge and citizen engagement to meet the challenges of our city. Future Cape Town is the founding partner of Our Future Cities, which also houses Future Johannesburg, Future Lagos and Future London.
Who makes up Our Future Cities NPO? Read more here.

Background
Future Cape Town was started by Rashiq Fataar in July 2010, in the period after South Africa’s successful hosting of the 2010 FIFA
World Cup, initially as a means of stimulating a broader debate and questioning the future direction of the city.
Under the tagline “inspiring a more liveable city”, Future Cape Town was born as a social media account on Twitter, which began to challenge this status quo by prompting and asking tough questions about the ways in which the city would progress, in the process encouraging other citizens to do the same.
In late 2013, Future Cape Town welcomed Future Johannesburg, Future Lagos and Future London, and became a registered nonprofit, Our Future Cities NPO.

Solar-powered minibus taxis might be closer than we think. South Africa will be able to tap into our abundant solar energy resources to power them according to researchers from Stellenbosch University. businesstech.co.za/news/techn… pic.twitter.com/XxJrTaqlOT

Remote working in the Western Cape added an estimated economic impact of R9.6 billion and created 2,600 direct jobs The Western Cape aims to position the city of Cape Town and the province as a remote-working destination. businesstech.co.za/news/busin… pic.twitter.com/8UdMIjYy0W

Bellville has a new urban food garden! The food garden supports the nutritional wellbeing of homeless and jobless adults in the area, providing water and food security. gtp.org.za/bellvilles-fir… pic.twitter.com/lK5fz3yiB5

About 4 days ago · reply · retweet · favorite

Will the N2 Express Service be returning soon? The City of Cape Town seems to think so. capetown.gov.za/Media-and-new… pic.twitter.com/WdCQgNgb59

RT @zilevandamme You can’t be unvaccinated, lamenting mutations, infections and death rates going up, and be angry at travel and other restrictions. Choose a struggle. These are the consequences of your actions. I pray death will not be a consequence of your irresponsible behaivour.

RT @NicSpaull Alternative Omicron headline: “World waits as key South African scientists determine how transmissible Omicron is and whether it is vaccine resistant”

RT @miamalan #JoePhaahla: #Vaccine mandates are not unconstitutional. It aligns with the Bill of Rights, because it's about protecting the public health of the country.

RT @sboshmafu South Africa being punished for being the smartest and most honest kid in the science class. 😭

RT @elutweet We can make Bellville into ZEA! Needs some innovation. twitter.com/GuerreraCasas/…

RT @lhamilton365 Belgium just also sequenced B.1.1.529 #variant from someone who was in Egypt (far from Southern Africa). You think #EU etc are going to restrict travel to #Belgium? No. But they might just decide to lump all Africa into one excluded no-go zone. The hypocrisy of the #globalnorth

RT @SnowgooseSA The Netherlands will trap a plane of people from SA on the tarmac and deprive them of water. But opened clubs, dropped masks and only reinstated social distancing when infections rose over 120 000 in a week. Embarrassing. twitter.com/ferialhaffajee…

Covid is enlightening all of us about South Africa's relationship with the UK and EU.

Cape Town's new Mayor to setup Future Planning Team! (and Urban Design gets a mention) "We must be bold in moving to the cutting edge of thinking in urban design, open data, and urban policy innovation." capetown.gov.za/Media-and-new… pic.twitter.com/hYwm7vSMXH

RT @Alex_Boroch I'm currently rewatching that legendary Australian Open 2007 run from Serena when she was considered "done" by experts such as Pat Cash. She ended up winning the trophy, beating #1 seed Sharapova 6-1, 6-2 in the final. Look at these CONSECUTIVE return winners on 1st serves... pic.twitter.com/g54zV46L2U

The City of Johannesburg has a new mayor. This after the DA's Mpho Phalatse was elected the city's new mayor during a special council meeting on Monday evening. enca.com/news/das-mpho-… pic.twitter.com/FPF2BhhjxM