The Supreme Court of the Netherlands

The new building for the Supreme Court of the Netherlands by KAAN Architecten has been decidedly integrated into the elegant historic city center of The Hague. The building, which supports a staff of 350, verges on large: 104 meters long, 22 meters wide and 27 meters tall. These dimensions, with the measured vibrancy of the building’s façades, add some allure to this part of the city center. 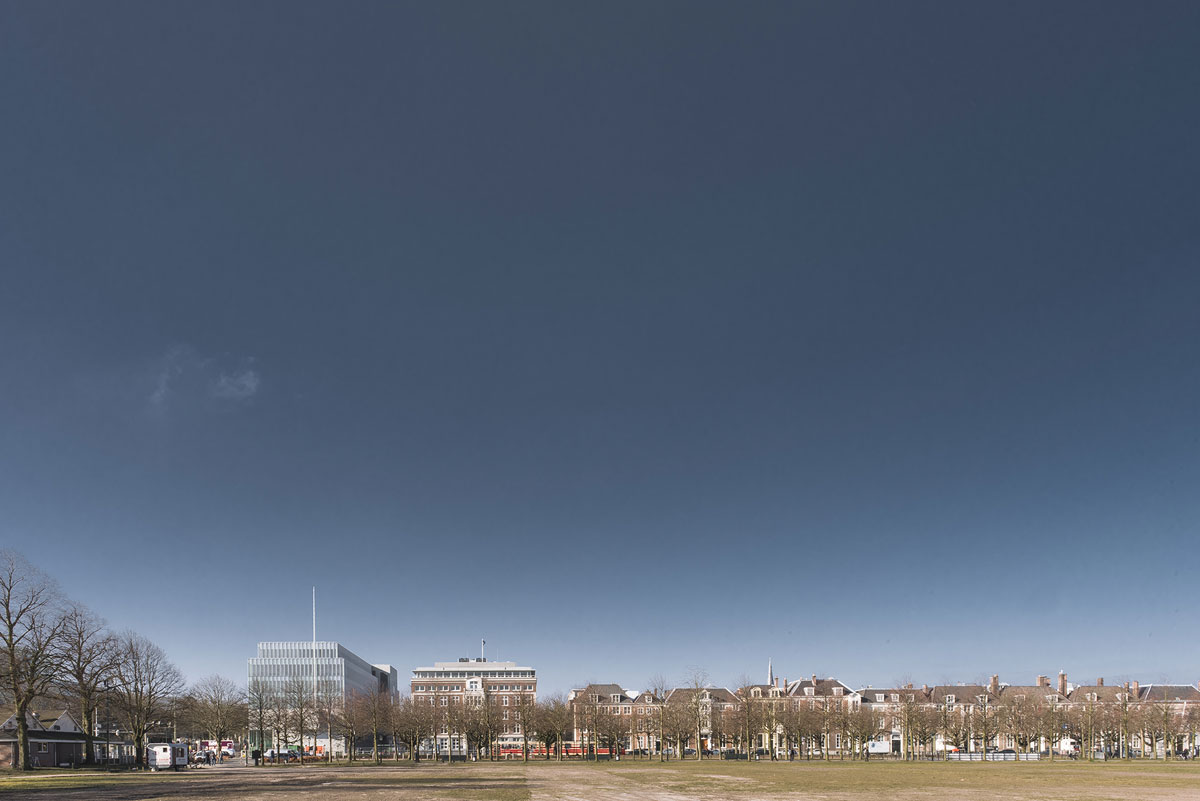 The plane trees and six legal scholars in bronze seated on pedestals make for a wide gateway on the Korte Voorhout, a royal route leading toward the buildings from the Parliament. The entrance hall seems to have been chiseled from a solid block of marble. It serves as a sturdy base for the superstructure of glass panels and slender latticework. These and other ostensible contradictions seem to reflect the work of the Supreme Court itself. Open and closed, distinguished and functional, hard and ethereal, rough and refined – all exist alongside routine business, on which judgements are passed with great clarity of mind. 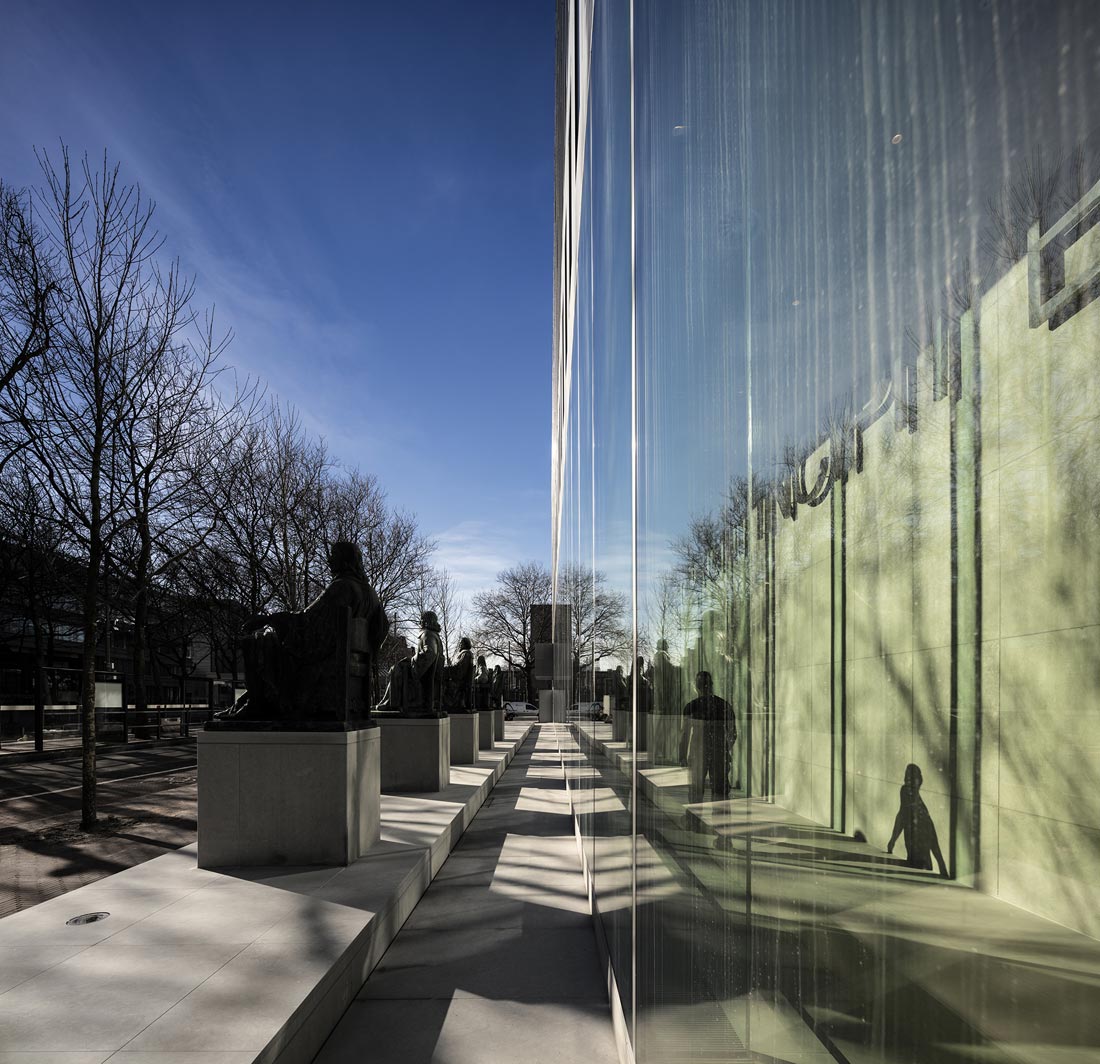 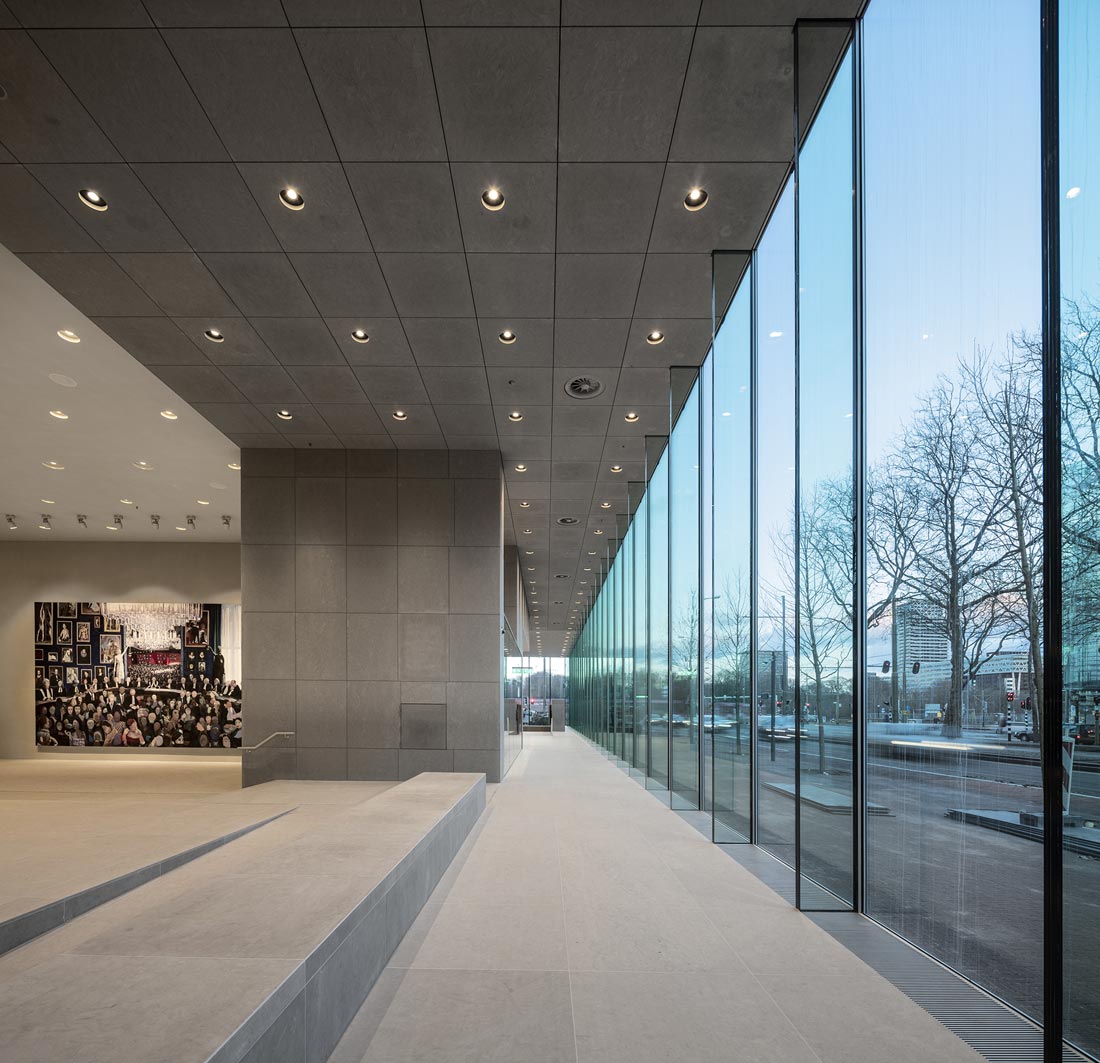 A court building is by definition a complex structure, because it must have various routes of circulation that cannot intersect. Routes for the public sitting in on sessions, for the Council and Procurator General staff, and for the detainees escorted to their sessions in court; all are separate from one another. The staff have their own entrance that opens onto their workspace. The judges have their own routes into the courtrooms. Even the dossiers follow their own path. It is a mark of achievement that a solution was designed that made all the routing to seem completely natural.

Given the public nature of jurisdiction, court buildings need to be accessible to the public. They are not only open to the public, they also have facilities for the public: visitors’ galleries in the courtrooms and waiting areas in front of them. On the other hand, court premises must also provide excellent conditions for work that requires a high degree of concentration and work that takes place behind closed doors.

The positioning of the building in regard to its location was chosen resolutely and with care. The low plateau, with its row of scholar statues, creates a subtle transition. Through this zone the building attaches itself to the street and its breadth is moderated. The way in which the top line has been sutured ensures a soft presence and inclusiveness within the orderly roofscape of this part of the city. Larger-scale urban design is successfully achieved by way of smaller-scale architectural choices. The so-called “backpack” is also an example of subtle insertion. This extension at the back of the building’s juts out and connects with the surroundings. The glazing fits into the same story. The six-meter-high windows on the ground floor pull the space of the entrance hall into the city.

The entrance hall of the Supreme Court, with courtrooms and the press area, forms the public area, a space spanning double the floor height and covering the full length of the building. The street area of Korte Voorhout seems to flow through the six-meter-tall glazing into the entrance hall. The floor of the hall has a geometric pattern in low-relief and provides a landscape of sitting opportunities, dotted with loose, dark brown leather cushions, making couches and chairs unnecessary. The floors and walls are of a light grey limestone that exudes a velvety sensation. 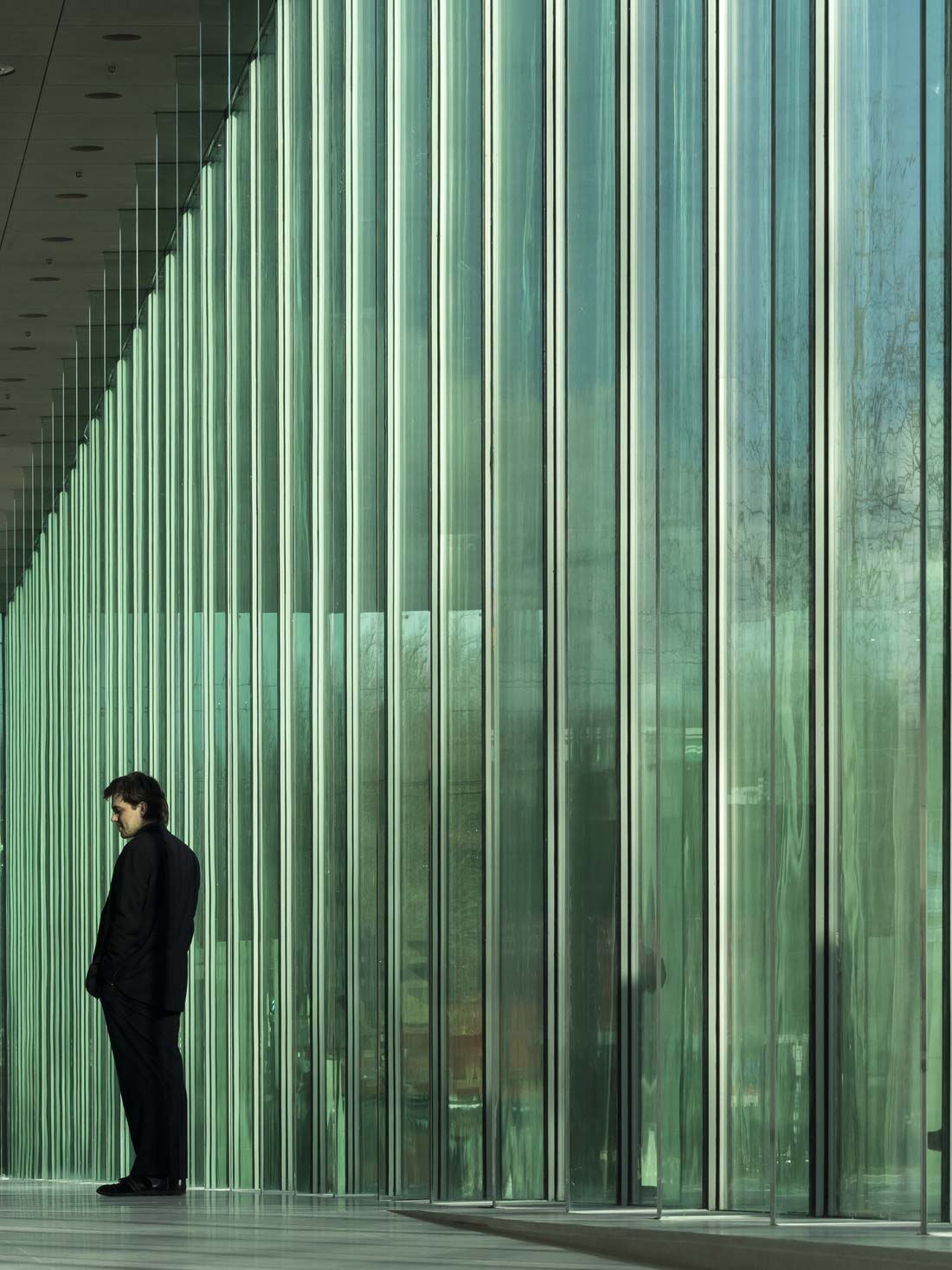 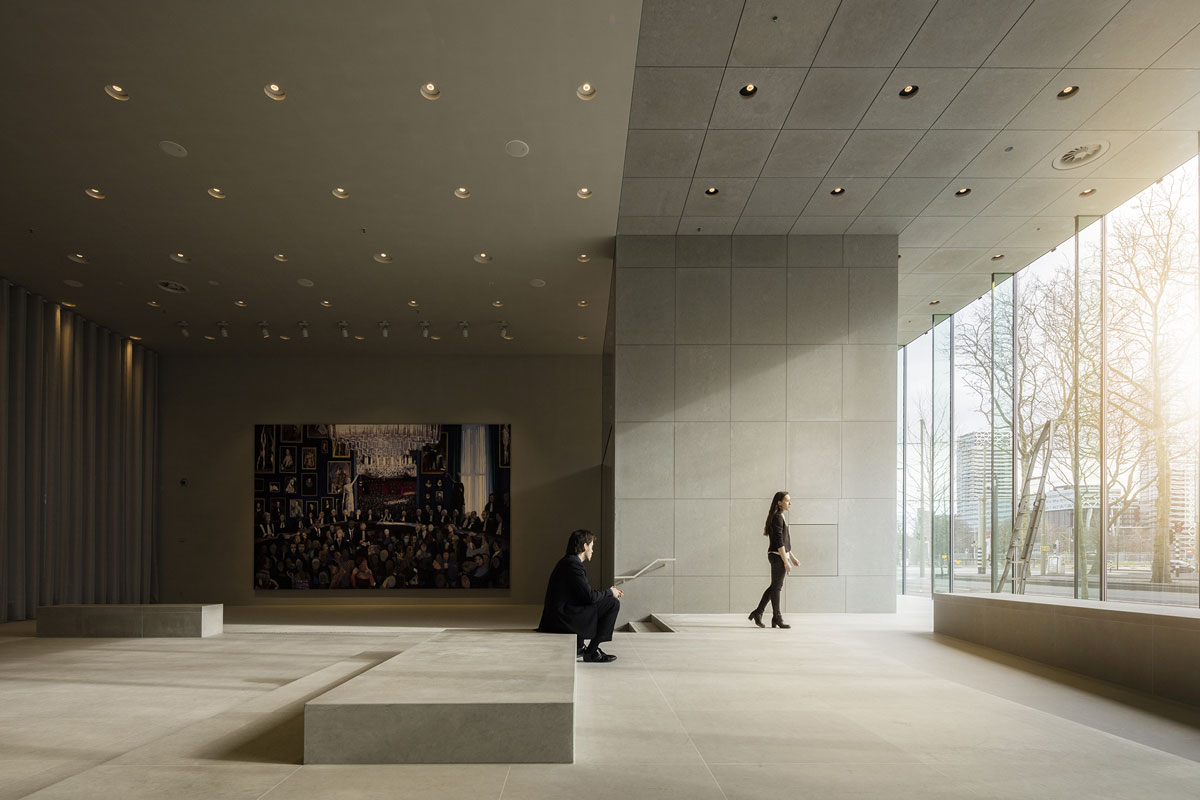 In the middle of the entrance hall, on the wall of the square inner courtyard between the two courtrooms, is a surprising painting by Helen Verhoeven commissioned for the spot. At 4 x 6 meters, this monumental work is quite a bit bigger than Rembrandt’s Nightwatch in the Rijksmuseum. Titled Hoge Raad, the populous painting gives an impression of the history of the Netherlands as a society and state, and the place of the Supreme Court within that history. The paintings represented within the painting refer to the consequences of the absence of orderly justice. This touches on the Supreme Court’s motto, words penned by the Dutch legal scholar Hugo de Groot (1583-1645), founder of international law and maritime law: UBI IUDICIA DEFICIUNT INCIPIT BELLUM. Loosely translated, the motto reads: Where legal justice falls short, armed struggle begins. 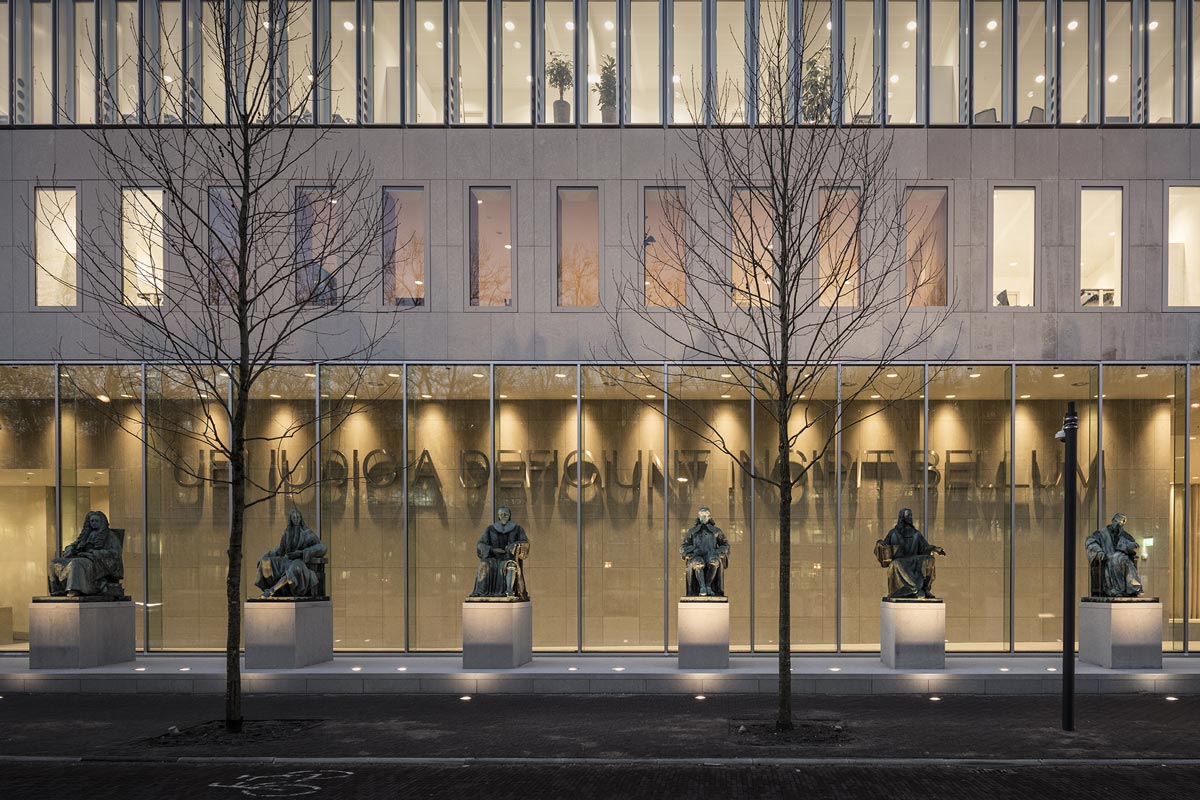 The windows on the floors above are of unified glazing, in panels of 90 cm with 10-cm joints, stretching the full height of the upper façade. There is an even division of vertical planes over the whole façade and the slender columns per window disappear in the radical rhythms of the frontage. From outside, the façade seems to have no supporting columns. The entire concept is grounded in a single design detail. 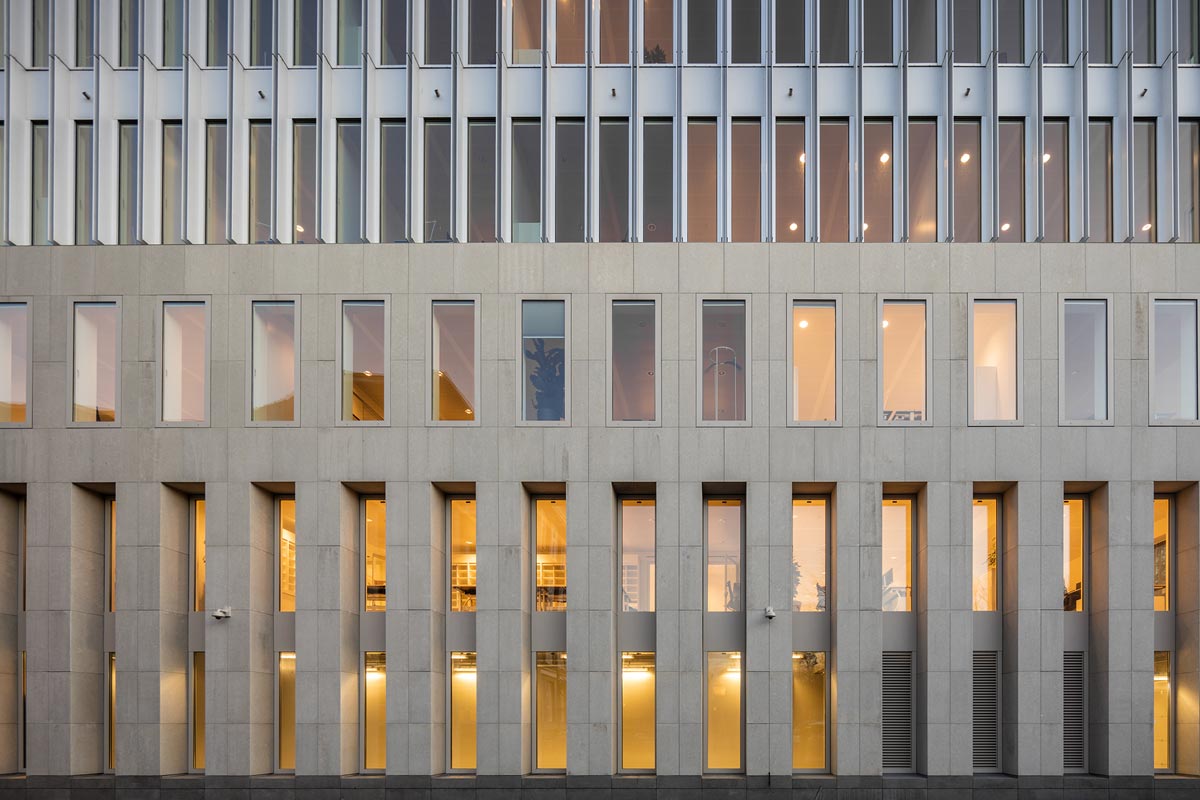 All workspaces have lofty ceiling heights of at least three meters. Usually in office Buildings, spent air is pumped away through air pipes that take up a lot of room in ceilings. In the Supreme Court building, the jambs of the door frames evacuate this air from the rooms into the open areas and ventilators above transport the spent air out. A labyrinthine construction in the frames prevents sound leakage between workrooms and hallways. 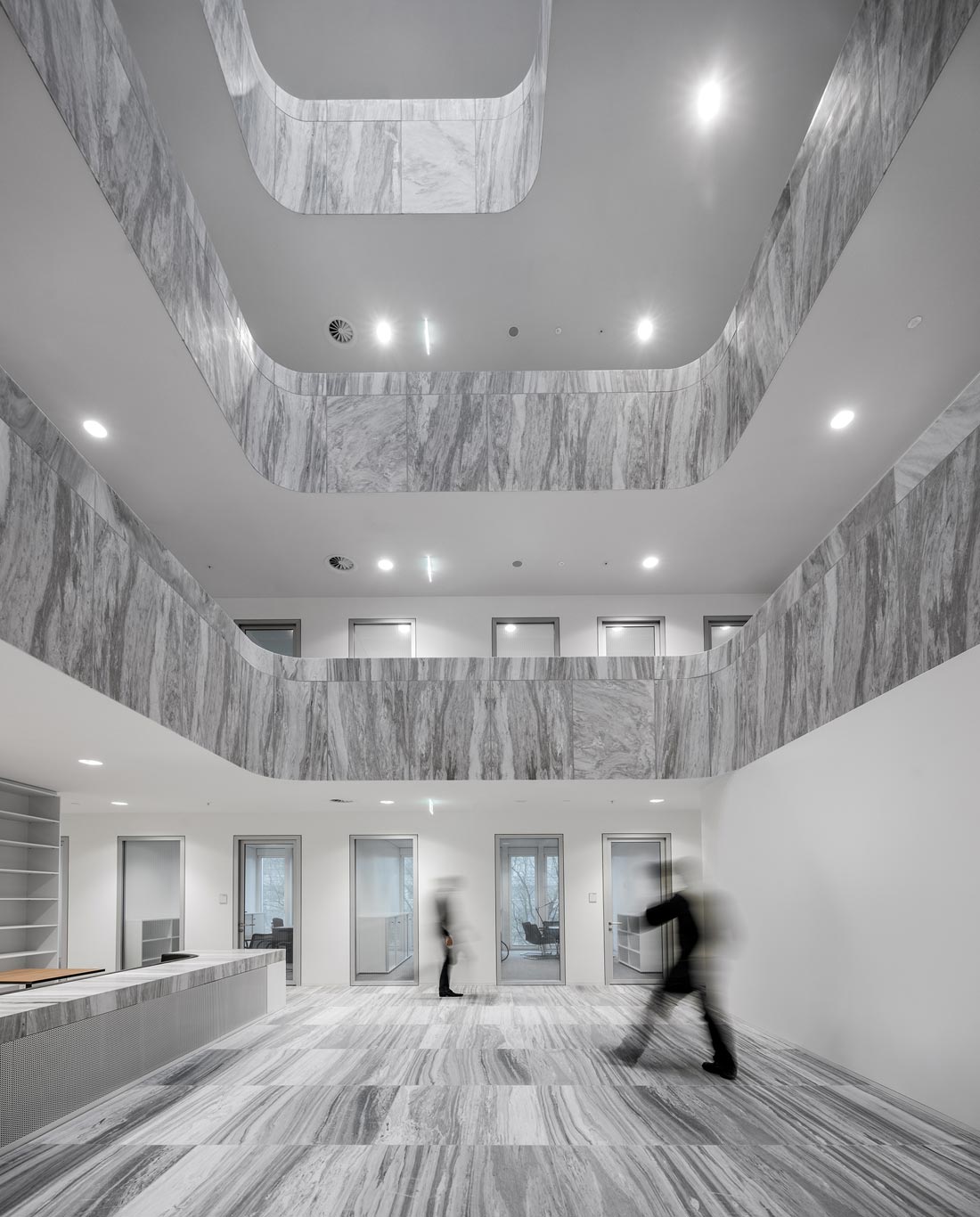 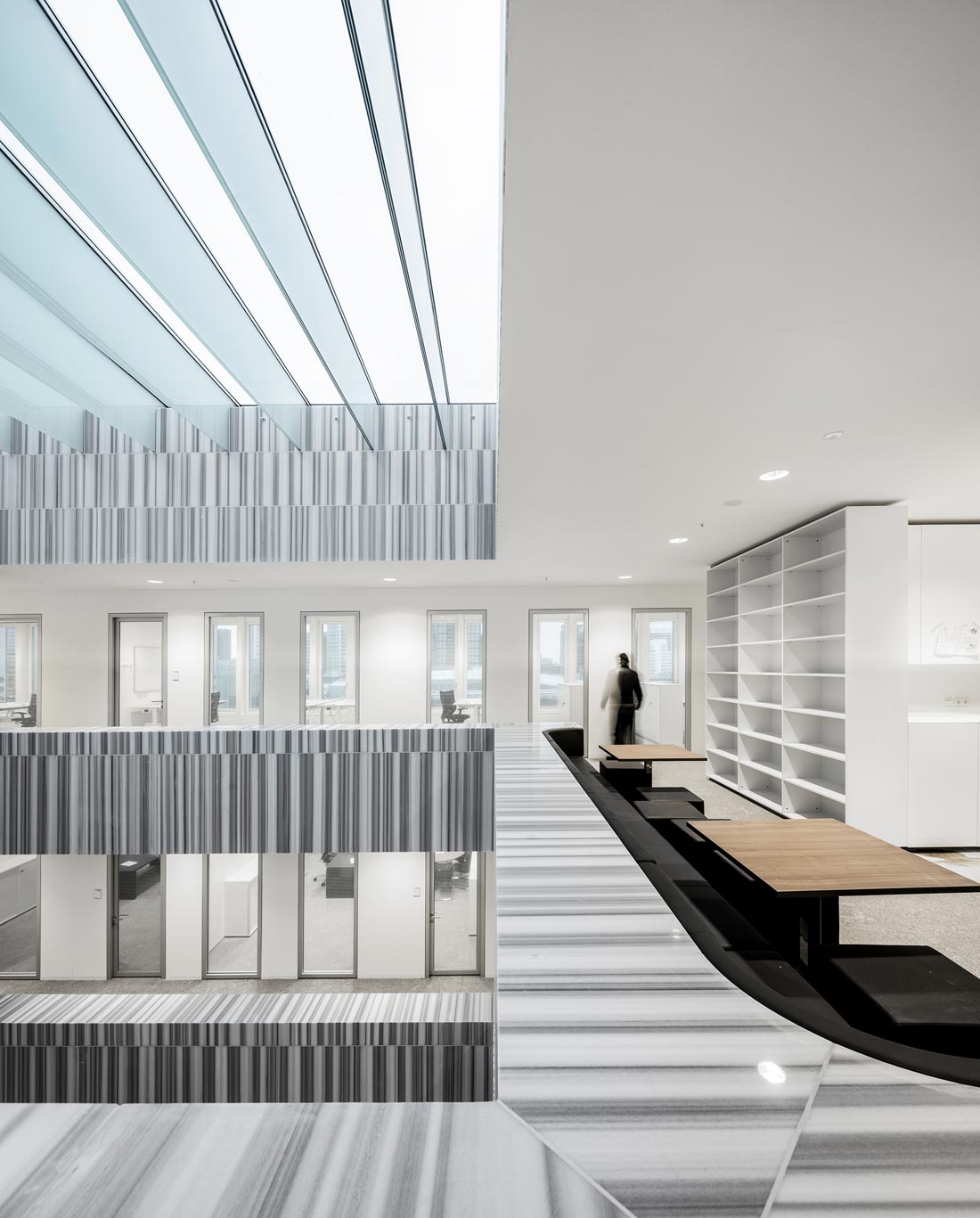 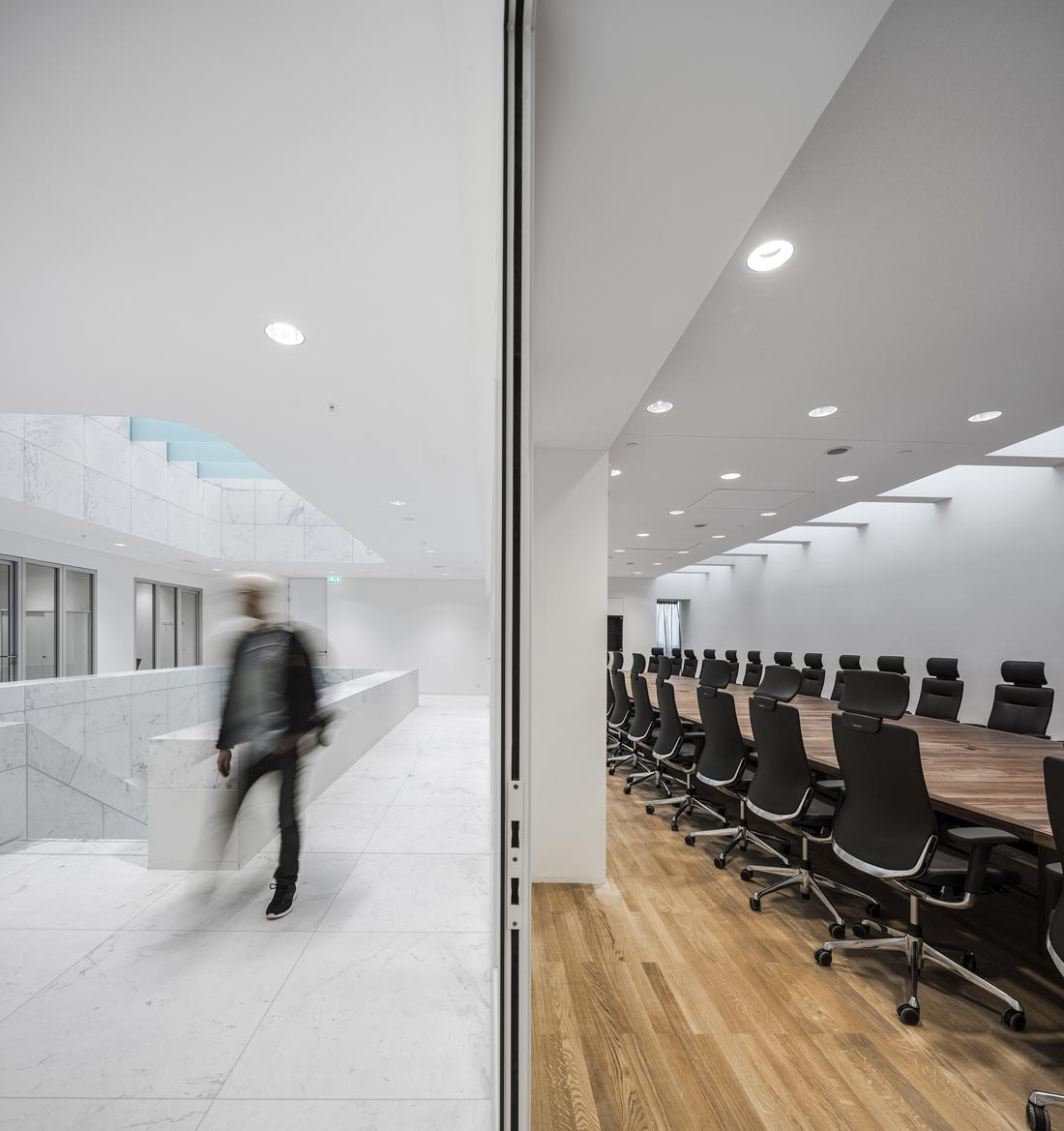 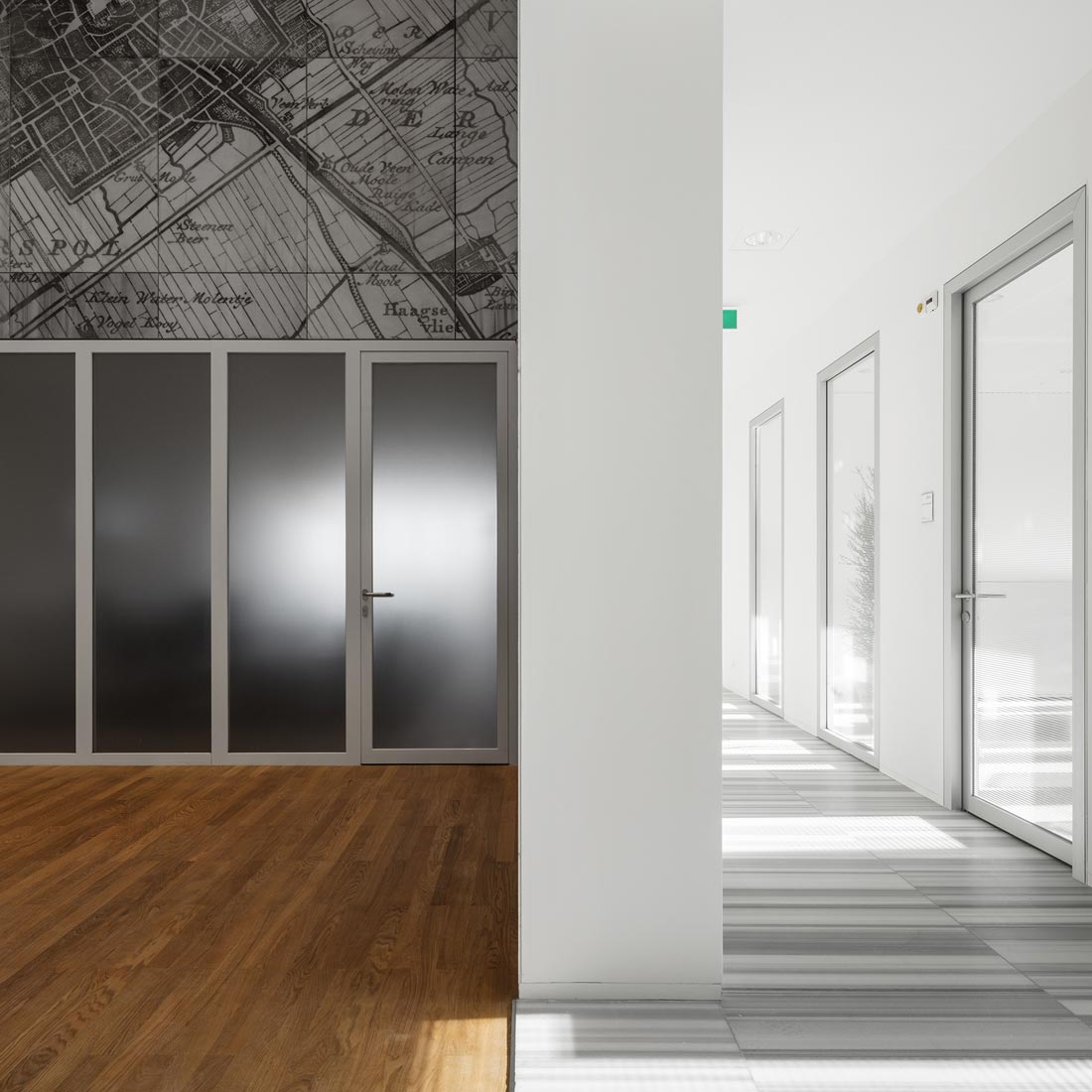 Daylight in the heart of the building is very important, but the light wells and open atriums serve another important purpose for the building’s users. They form the core of the distinct domains of the Council and Procurator General. At the circumference of the openings, each floor has pantries equipped with coffee machines, seating and bookcases. The various departments are forged into unity around the central points of the building. The light, the open sightlines, and the wide perspectives stimulate greetings and encounters, encourage an exchange of thoughts and opinions, advance the sharing of insights, and allow for informal relations in a congenial working environment. The balustrades around the opening are clad, on the open sides, with vertically striped marble. The series of balustrades one above the other, the stone flooring and the beautiful natural light recall the interiors of the historic townhouses found on Lange Voorhout or the Vijverberg. They also have associations with longevity and respectability. 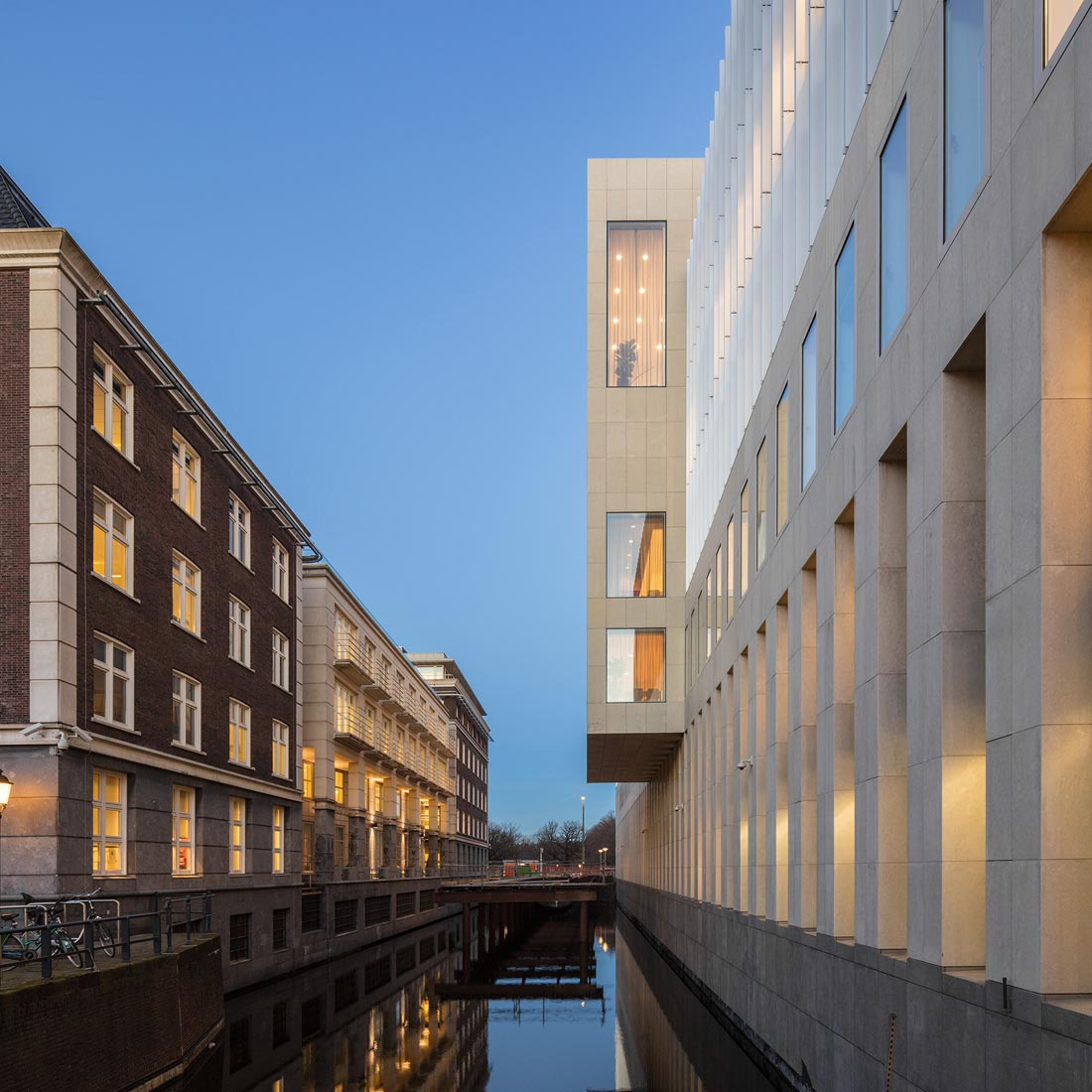 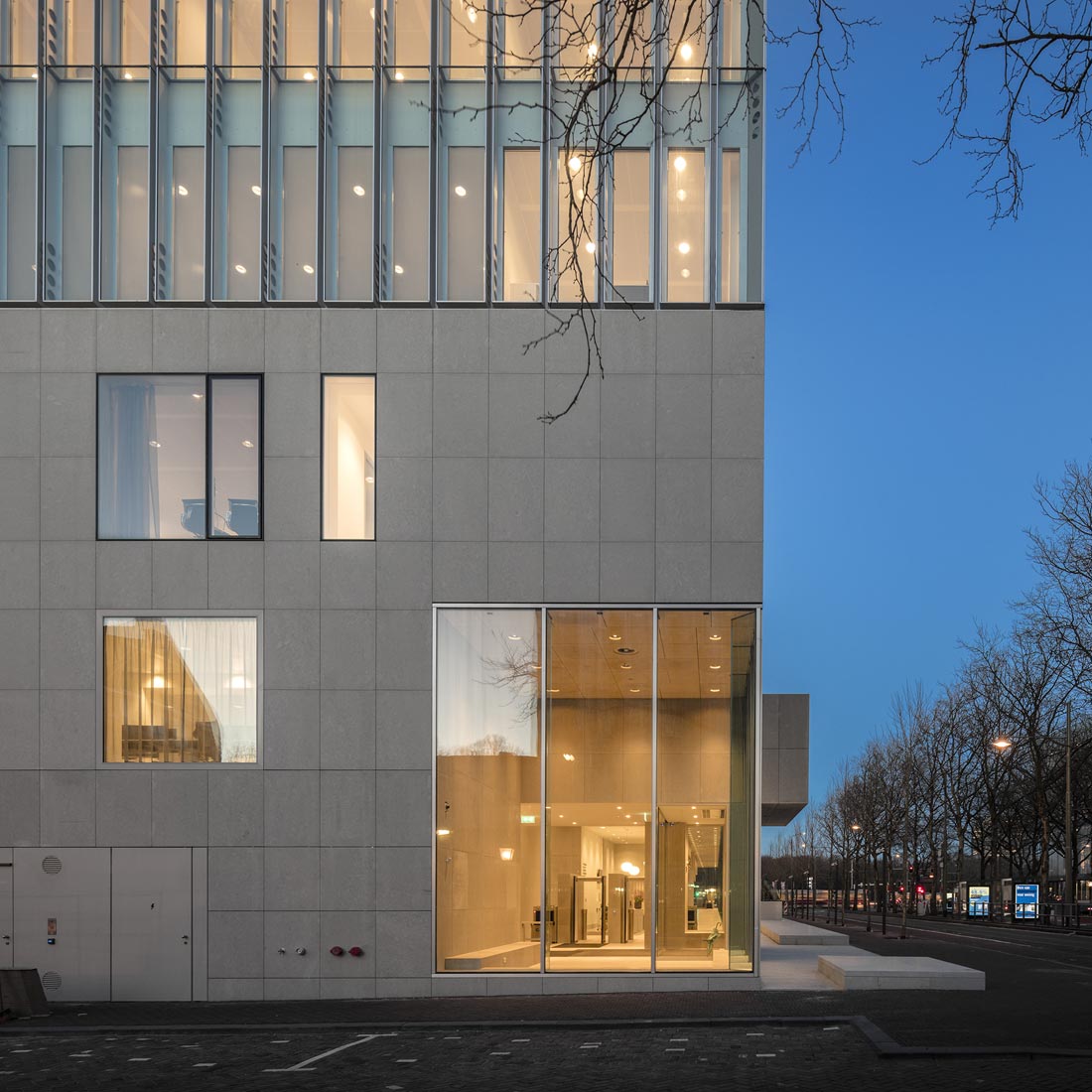 Three sides of the building are exposed to sunlight over the course of a day. These façades are climate controlled through the use of a spacious cavity in the glass casings: glass boxes that not only keep out the heat and cold, but also the sound of traffic outside. Nonetheless, the windows can be opened if desired, while still keeping wind and noise out of the interior. Sun shades and light filters can also be individually regulated – the sun shades are installed behind the first window and the light filters are behind the second. This individually controlled double protection produces a layered façade, which is flat and yet canted – a subtle nuance that adds even more elegance to the whole. 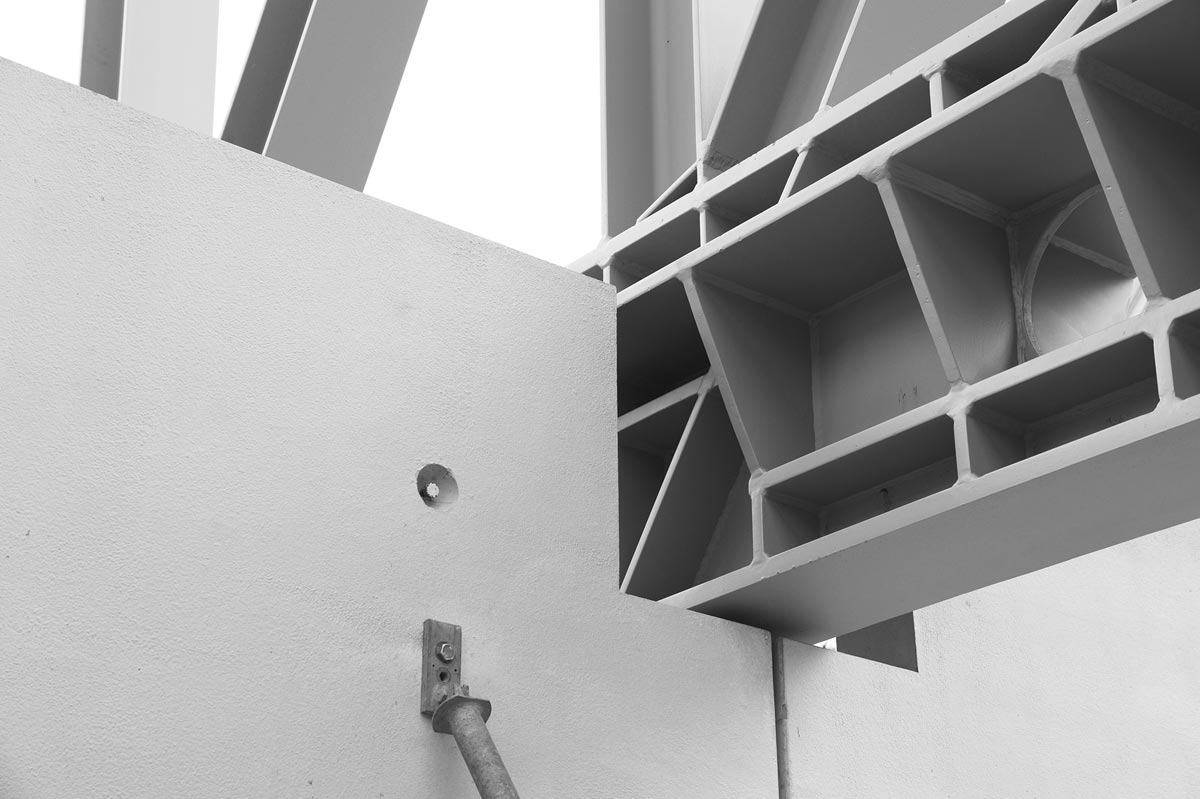 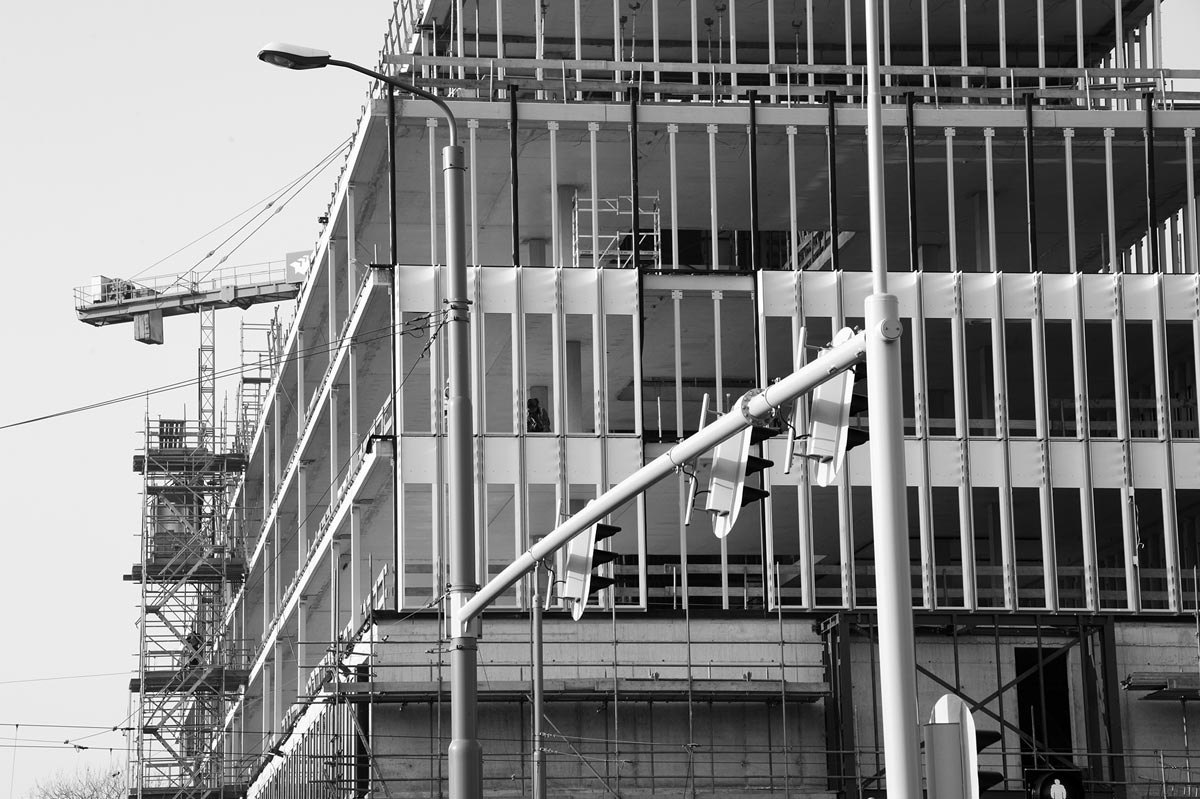 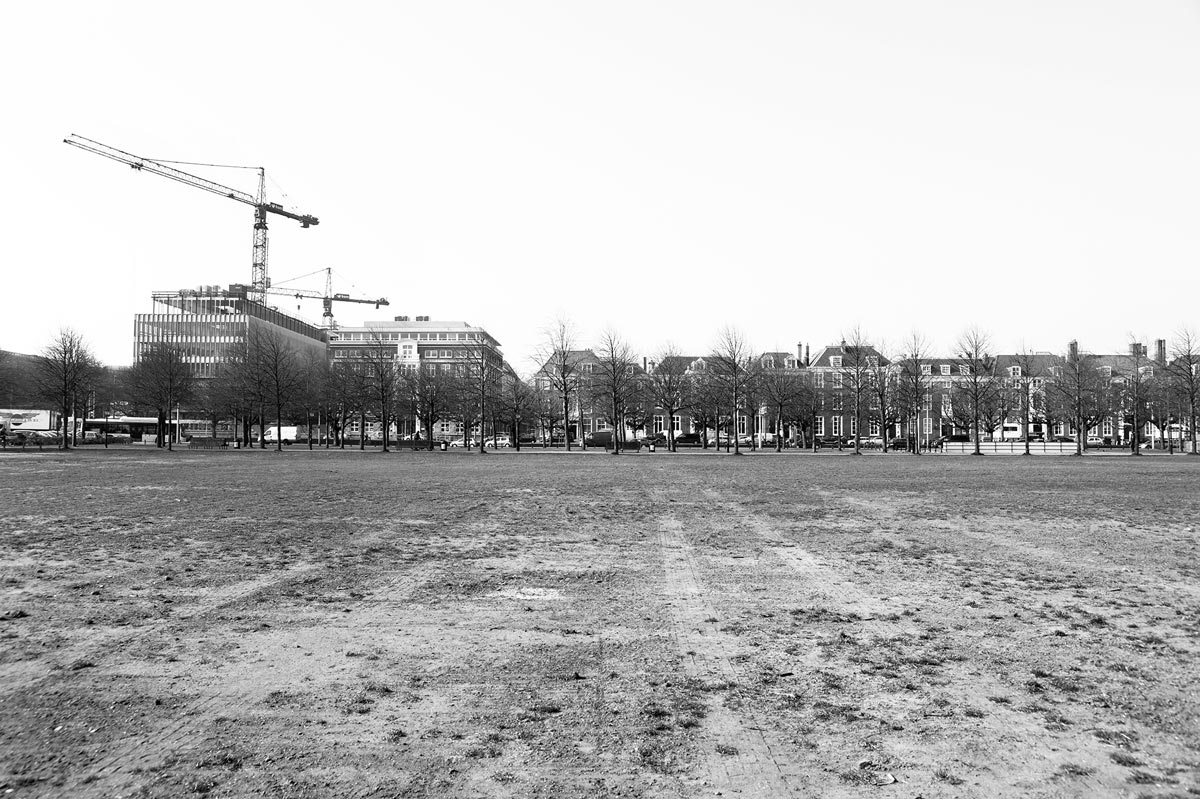 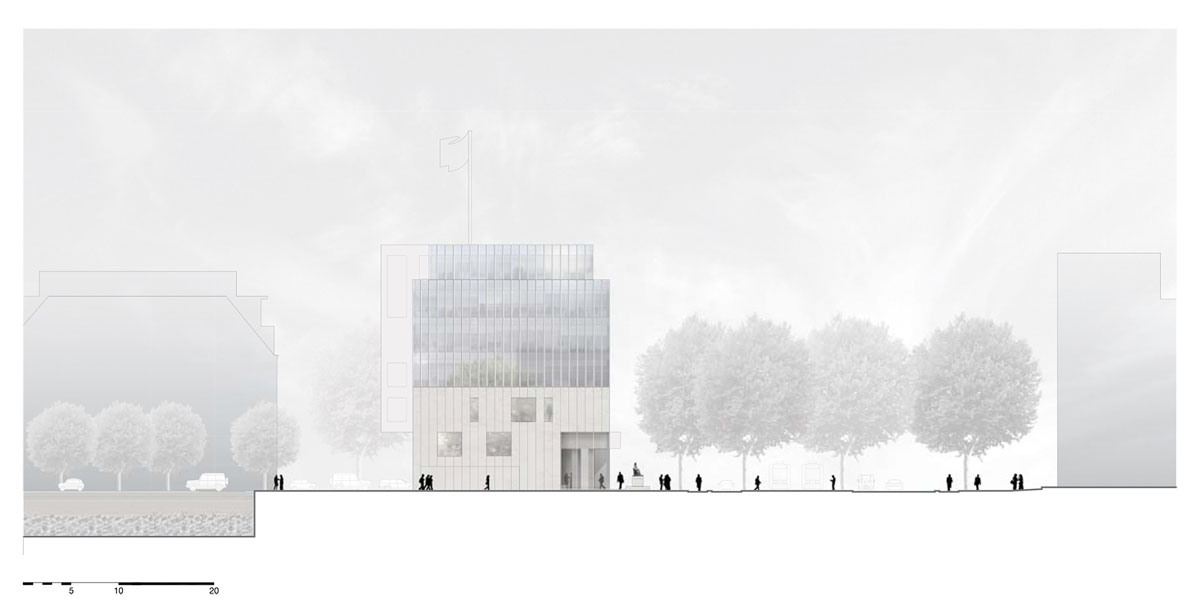