The area of Stud Farm Lipica is one of the most remarkable natural and cultural monuments in Slovenia. The stud farm was founded in 1580 when the Habsburg court decided to raise horses, a key strategic commodity of the time, in their own territory. The Andalusian horse proved to be ideal: the karst landscape, where the stud farm is located, is very similar to southern Spain in its soil and climate, likely leading Charles II, Archduke of Austria, to use the abandoned summer mansion belonging to the archbishop of Trieste for the court stud farm. Two hundred years of intensive breeding and selecting for desirable traits ultimately produced the renowned Lipizzaner breed. 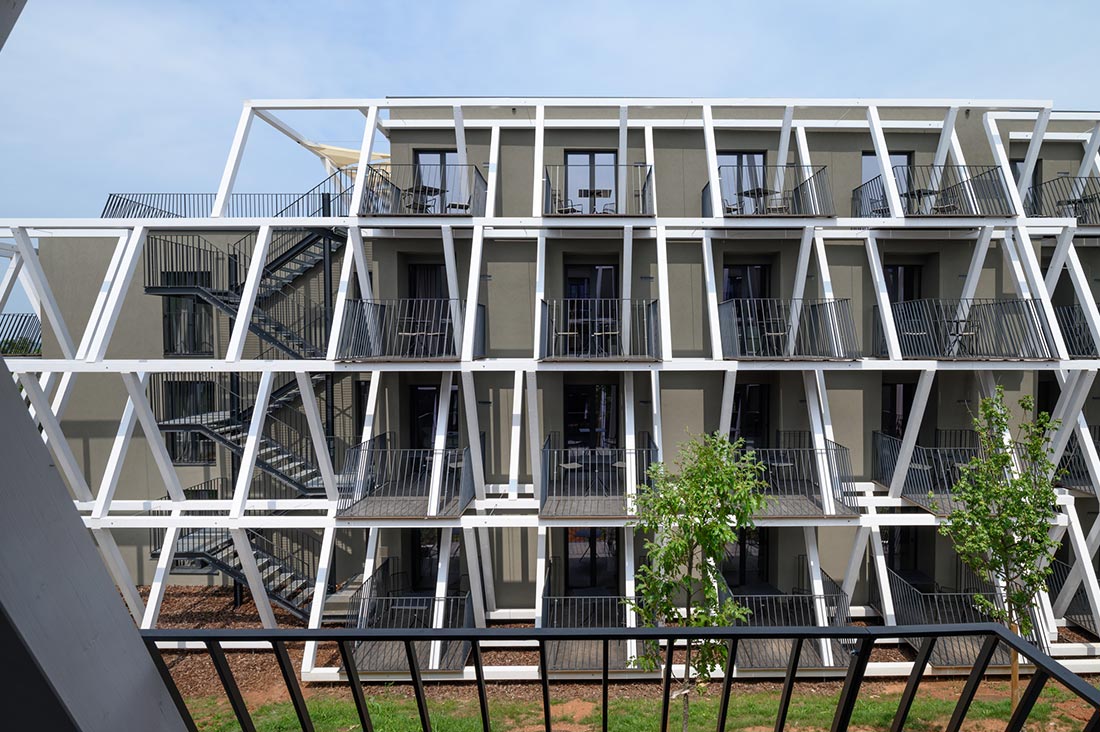 The cultivated karst area around Stud Farm Lipica comprises pastures and meadow areas featuring protective fences, oak groves, and tree lanes. Lipica’s cultural landscape is a self-contained and redeveloped natural environment, and its development has been rooted in the centuries-long tradition of raising purebred horses. As required by the horse breeding, people have ameliorated and cultivated the barren karst landscape into surfaces suitable for grazing and haying. Lipica thus gained its present-day appearance some time before 1817, as evidenced by a historic land survey depiction. Even before that time, the entire estate had been homogenously fenced off with a typical karstic dry stone wall 8 km in length. This extensive undertaking did not merely respond to a functional aspect but also held symbolic significance for the comprehensiveness and exceptionality of Lipica’s cultural landscape. In the historical sense, the land use has always been committed to uninterrupted raising of the area’s unique breed of horses. The spatial quality of the original stud farm producing one of the oldest breeds of horses gives Lipica’s cultural landscape the mark of exceptionality and makes it peerless on a global scale. 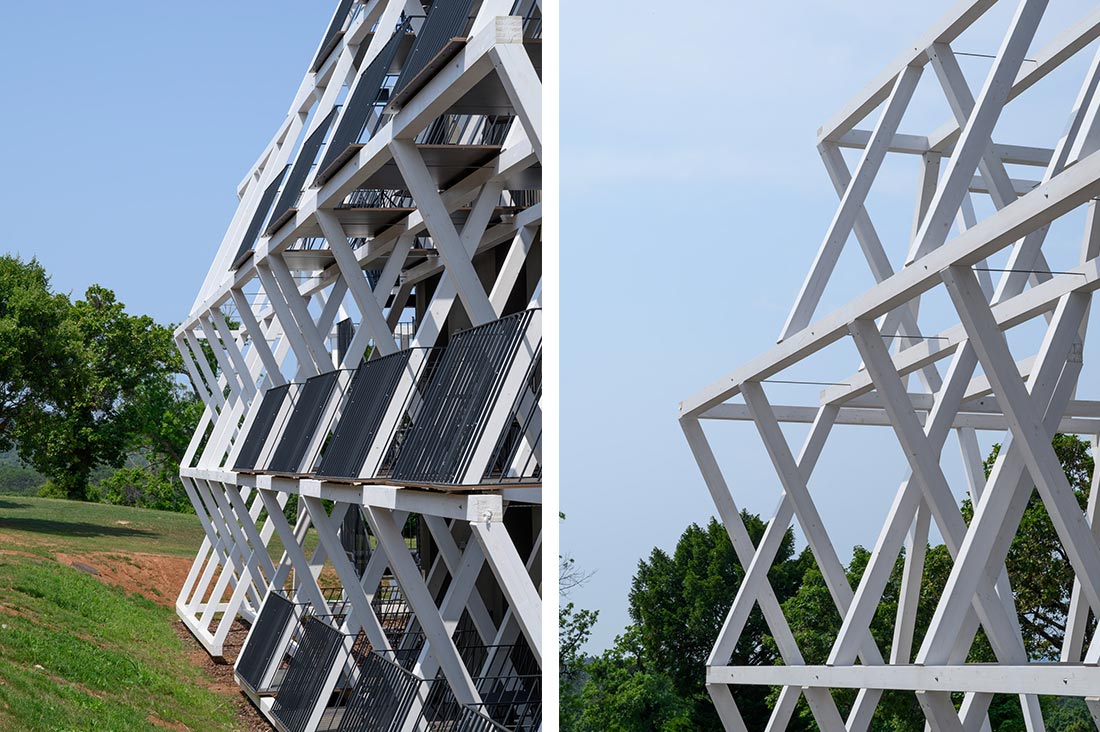 The historic built core of Lipica, designed around the Renaissance mansion, took on the appearance of a congruous whole in the early decades of the 17th century. Through the years, it continued to develop until large tourist accommodation buildings were built in the 1970s, when the exceptionality of Stud Farm Lipica began to pique the interest of visitors from across the world. 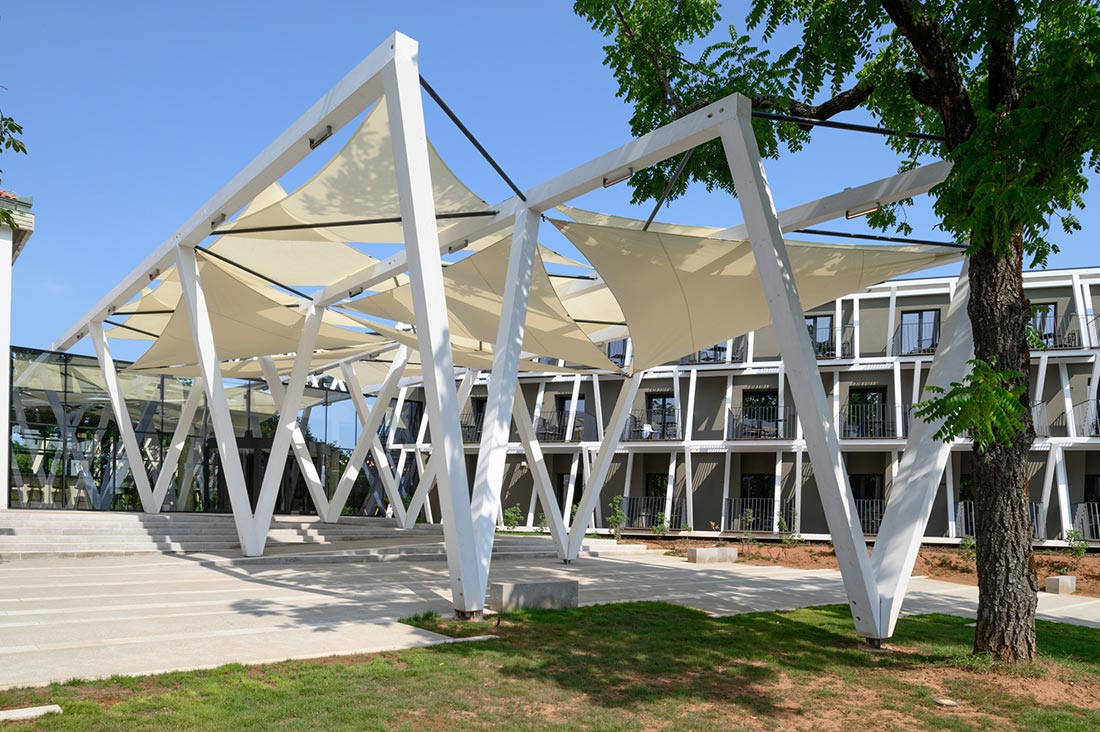 Hotel Maestoso is the largest of all accommodation buildings in Lipica. It is also the visitors’ primary contact with the stud farm environment. Its relatively aggressive appearance – due to the use of architectural elements from a certain period – poses a strong, even distracting contrast with the smoothness of the access paths used by the visitors to access the complex. The distinctive line of white fences which undulate among the green tree lanes, and the rest of the upkept natural landscape with the grazing herds of the celebrated white horses, ends rather ungraciously at the car park with the overbearing presence of the existing hotel building. 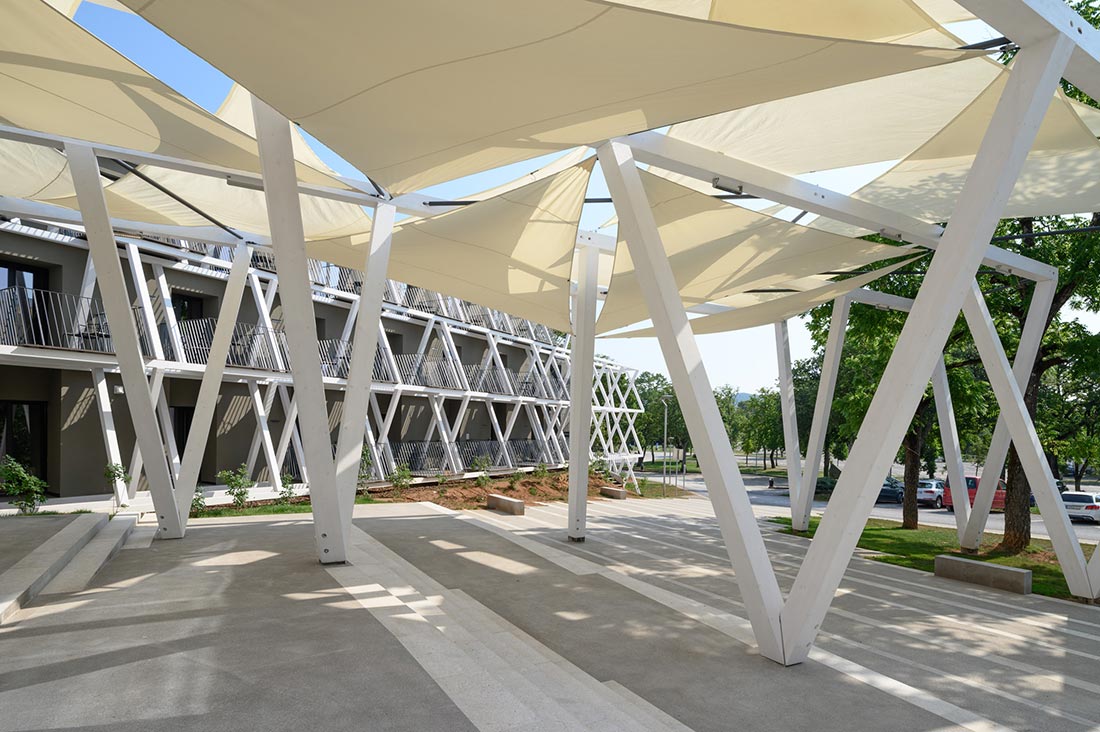 The fundamental guideline in designing the renovation and expansion of the hotel was to find a way to tone down the building’s presence in the space. Instead of the customary pursuit of the most appropriate appearance, the main consideration became the attempt to dematerialize the built volumes. The proposed intervention suggests purging the hotel’s façade of all added architectural elements and unifying the structure’s expression by establishing a new, light load-bearing structure of the balconies, which have so far only featured on parts of the buildings. The new structural membrane enveloping the entire hotel and swimming pool area establishes a sort of intermediate space between the buildings and the landscape. The interplay of light and shade breaks down the monolithic built masses and, together with the greening of the existing volume with climbing plants, dematerializes the building to the greatest extent possible while endowing it with a distinctive and recognizable character. 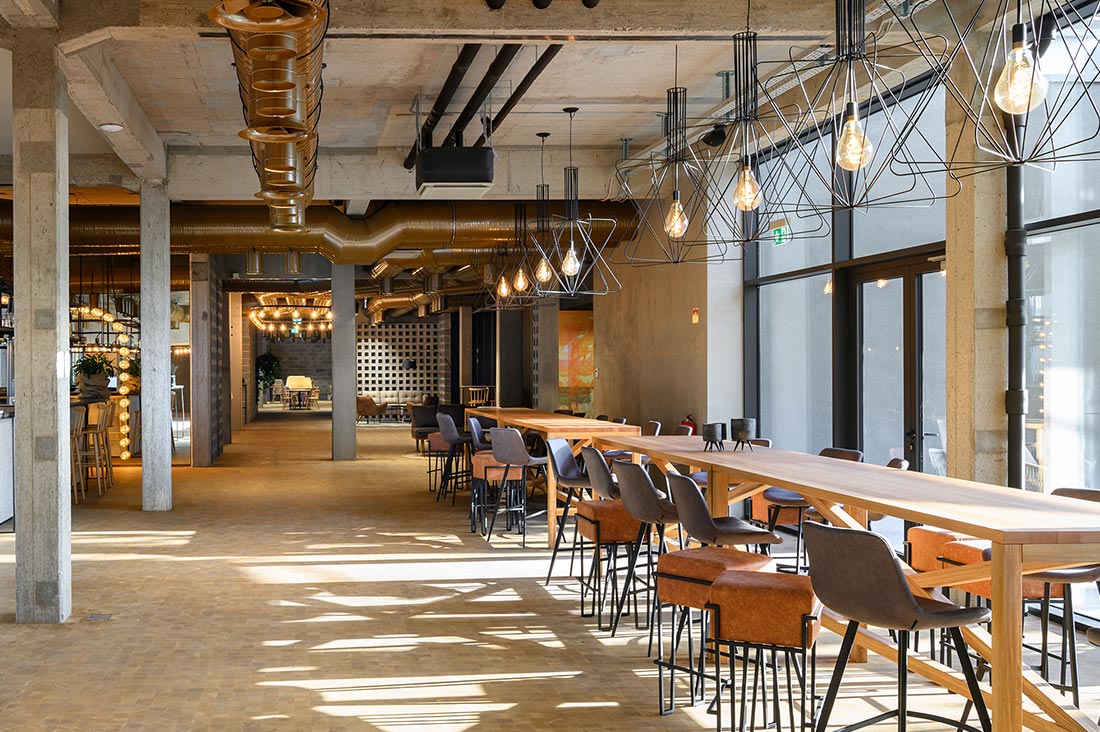 Special attention was devoted to the planned expansion of accommodation capacity, which would contribute to the already substantial built mass. Crucially, all the existing service-related and other un(der)used facilities are repurposed for new accommodation; in this way, the increase in capacity is found primarily on the inside rather than on the outside. The only additions to the original volume are a deck floor, which replaces the currently unused gable roof, and a short new wing of the hotel. The latter does double duty of also blocking the views from the existing rooms toward the service yard, another insensitive former intervention in this delicate space. 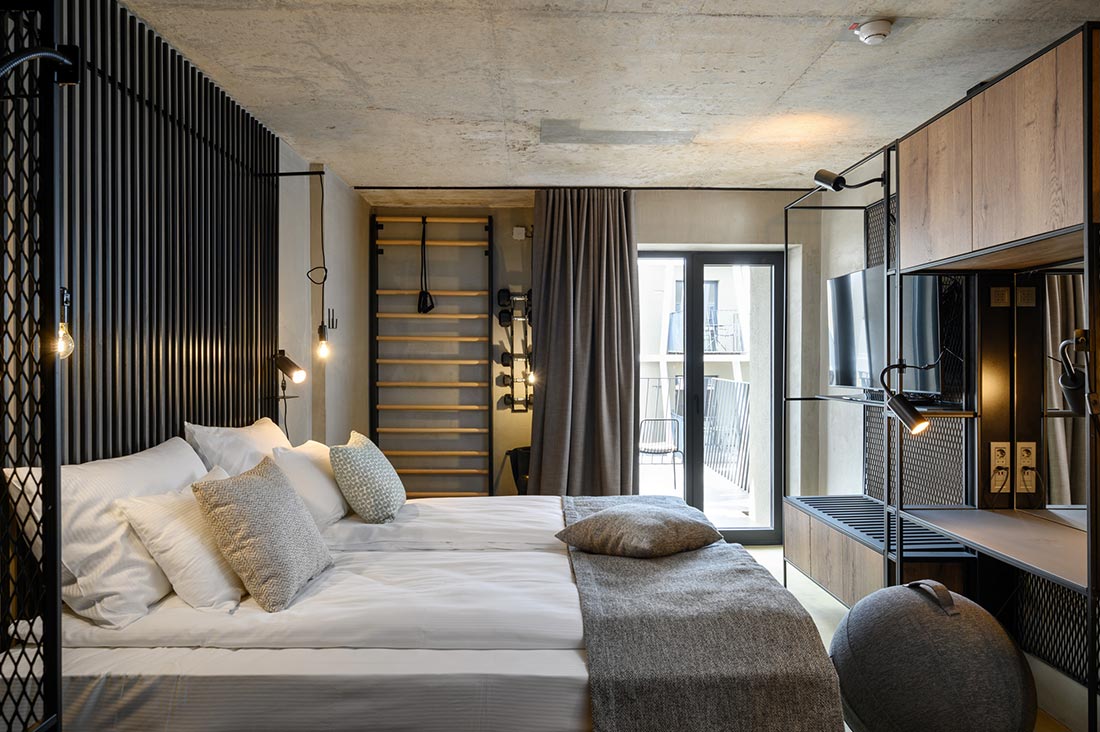 To improve the building’s connection with the cultural landscape, the renovation intervention also envisages the elimination of the car park immediately in front of the building, transforming it into a park so as to allow for the expansion of the covered exterior terraces. All the eaves are also designed as a latticed structure of white timber glue-laminated beams, which provides an additional upgrade to the new, distinctly recognizable expression of the complex. The exterior paving is predominantly executed in compressed bonded sand, which offers a soft transition between the functional surfaces of the hotel and natural surrounding landscape of the stud farm.

The interiors of the renovated hotel and pool section are designed as a modern interpretation of the horse-stable interior spaces. As such, the public program is designed as a particularly flexible space that can be adapted using folding partition walls. The existing buildings are stripped to the raw concrete structure, which remains visible and acts as a suitable frame for the minimal additional interventions, ensuring a warm expression of the interior space. Combining the use of materials that visitors associate with the materials used in the stables and the visible network of building services (without needless concealment) mentally connects the interiors of all the stud farm’s buildings into an inseparable whole. The raw iron, timber boards, hay, the concrete floors in the rooms, and the floors made from cut wooden dowels in the public spaces, combined with carefully designed lighting and small, movable pieces of furniture and decoration, form a warm space that enhances the complex’s unique program and location. 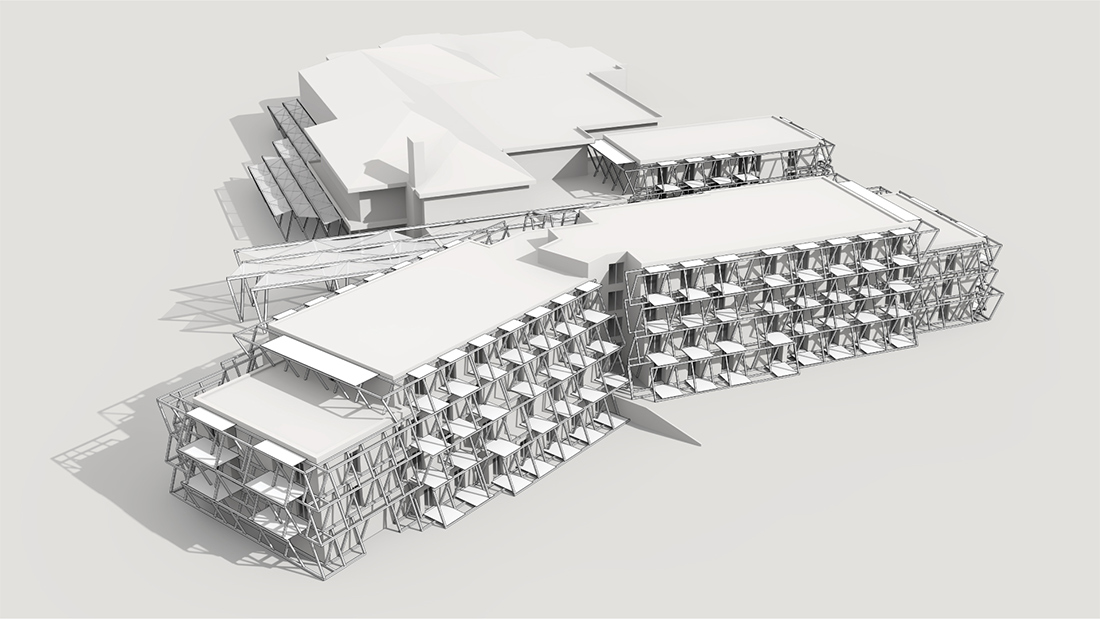