Writing a thesis often seems to be about writing very common-sense observations down, in different ways, until something seems strange enough to serve as a new point of enquiry. Below is an extremely lengthy list of my working assumptions or claims I hope to prove, which I will refine and develop between now and August:

In Cape Town, middle class people wake up in low-density suburbs to occupy low-density transport that uses a huge amount of road space, while the poor wake up in high-density suburbs and occupy high-density transport that uses very little road space (in lane-kilometres). I am trying to find a good term for this; for now, I am calling it the reproduction of the space economy for land, in transport.

We buy positions in space with money, meaning that the rich outbid the poor for position close to what matters. The poor, for whom transport is most expensive, most precarious and most time-consuming, are forced by this process to consume much more transport than they otherwise would, to the point that a large part of the poor spend 45% of their income on simply moving around Cape Town. This is, I think, a form of induced transport demand.

Throughout the history of the South African city, ease of control has always been privileged over efficiency or rational planning. 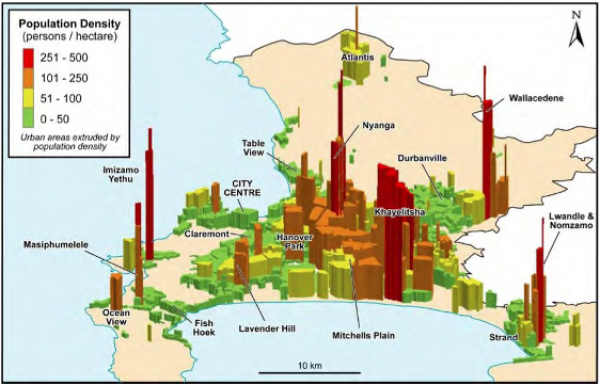 Throughout the history of the South African city, ease of control has always been privileged over efficiency or rational planning.

The transport problems of the South African metropolis could be solved in one of two ways, as with all transport problems (or rather a combination of both): increase supply, or reduce demand. As a society, we have for twenty years overwhelmingly acted on the first option, by investing to increase the mobility of the average urban resident. We have scarcely begun to deliver on the second option, by obviating some of the demand for transport through the creation of new, dense, well-located urban housing. (Think spending R1 billon on well-located housing versus the same amount on a loss making transport service to a community 50km away.)

Commuter cycling in Cape Town is overwhelmingly a transport mode used by low-income Black African men (using Census terminology). Successive surveys across the city, recorded in the last five years, have recorded very heavy bicycle traffic from and to informal settlements and low-income areas. The CBD and other heavily Instragrammed routes are a commuter cycling backwater.

All of the middle-class cycling that, for some, constitutes the public face of cycling in this city, represents only a minority of cyclists. However, this constituency is the only voice in any position to apply sustained pressure for improved general technical standards, and much of the progress we have had is due to them. Due to their financial status, these are also the only people for whom cycling is a choice between a wide variety of viable transport modes. Excellent work is being done here, but a broad-based coalition for cycling seems to be a distant prospect at present.

In South Africa, where cycling for transport is concerned, women are almost entirely absent. So are the elderly. So are children. Cycling is thus dominated by the demographic able to tolerate the highest level of personal physical risk – younger adult males.

South Africa’s roads are exceptionally violent places. Death rates on the roads of this country are some of the highest in the world (7th overall, WHO, 2013), and by far the highest for any large country, adjusted for income.

This is a country in which the dominant form of transport is, and has always been, walking.

Walking is a form of transport that requires, as an absolute condition of pedestrian safety, its own infrastructure. Yet the entire transport apparatus serves private vehicle owners. The entirety of transport infrastructure therefore fails in its primary function. The presence of anyone other than people driving motor cars is thus coded as transgressive in the public realm, by what we build and how we maintain it.

South Africa came last out of 36 large, middle- and upper-income countries for traffic accident fatalities, in the last report published by the major organisation in this field, the International Transport Forum’s Road Safety Annual Report for 2013. We are, by some measures, unique among comparable countries for the amount of residents of South Africa who are put to death when motor vehicles collide with their bodies.

We don’t build roads for the poor – not remotely. If middle-class South Africans used motor vehicles in the way that poor and working-class South Africans do, we would not need to expand, widen or otherwise invest in highway infrastructure for many, many years. Considering that every single person pays for road infrastructure out of general taxation (please, if you think that motorists pay for the roads, read up on this anywhere), our reliance on road infrastructure for all transport constitutes a massive transfer from the poor, who need very little road, to the rich, who need very much road. Bear in mind that the majority of all motor trips are short, usually with only one passenger, and non-freight-bearing: essentially, most trips in cars are short enough that they could be considered non-essential. Take this away, leaving only minibus taxis, busses, carpooling and freight, and there is no congestion. 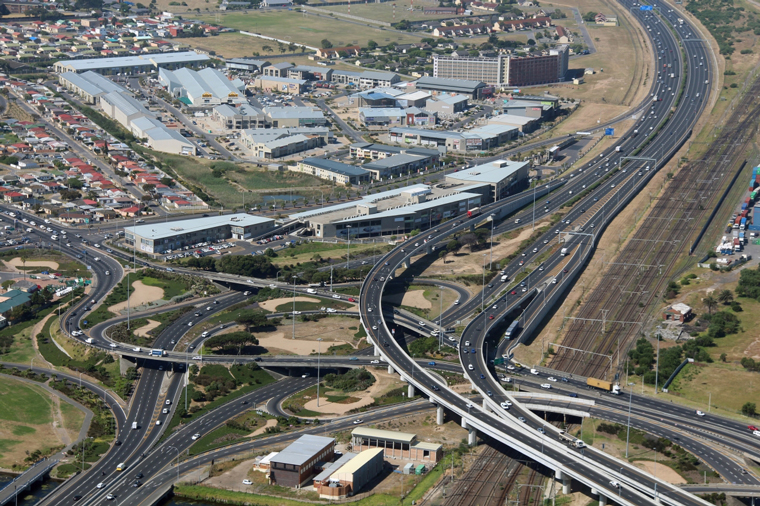 The only transport mode in South Africa that pays for the upkeep of its own infrastructure is the  railways.

Consider that every motorist (and I am a motorist, and had a car of my own for a decade from the age of 16, and will again whenever I need to and can afford it) takes it as a right that several cups of petrol can be poured out onto the ground and set on fire in a populated area, as a prerequisite for moving even short distances around the city. Every single one of us condones this system.

Deregulation of freight rail just before the end of Apartheid was a catastrophe for South Africa’s roads, and therefore for South Africa’s pedestrians. Our roads were never engineered to carry almost all the country’s freight. As a consequence of this, they require constant and very expensive maintenance, for which the road freight industry does not nearly pay enough; meanwhile, our incredibly comprehensive railway network stands idle. It has reached the point where foundries in Emfuleni are transporting *steel girders* by road to Durban, despite having been conceived from scratch around rail yards in the mid-20th century.

Precisely because even the newest cycling infrastructure is essentially broken-upon-delivery, even in Cape Town (which is itself decades ahead of other cities in this regard), cycling is still considered a low-status mode of transport, signifying poverty and exclusion.

When you are your own engine, the design and performance of the rod network is very much more important than it is for motor vehicles. Technical standards for cycling infrastructure must therefore, if you intend not to waste every single Rand of the budget, be far higher than standards for motor vehicles. Yet cars, which are powered by engines, enjoy direct routes everywhere, while machines powered by humans are forced into lengthy detours (and the classic stairs-on-the-bike-path portage event).

Cycling infrastructure must constitute a network if it is to be used by anyone except highly confident established cyclists who already possess a thorough knowledge of the city. That is, it must all link up. It must be signposted. It must be well-engineered. It must be direct. Anything less is futile.

The bicycle has existed in its current form since about 1885. There is literally no mystery about how to design infrastructure for it, and successful bike infrastructure is stunningly similar the world over (because the geometries, speed and nature of bicycles are, too). 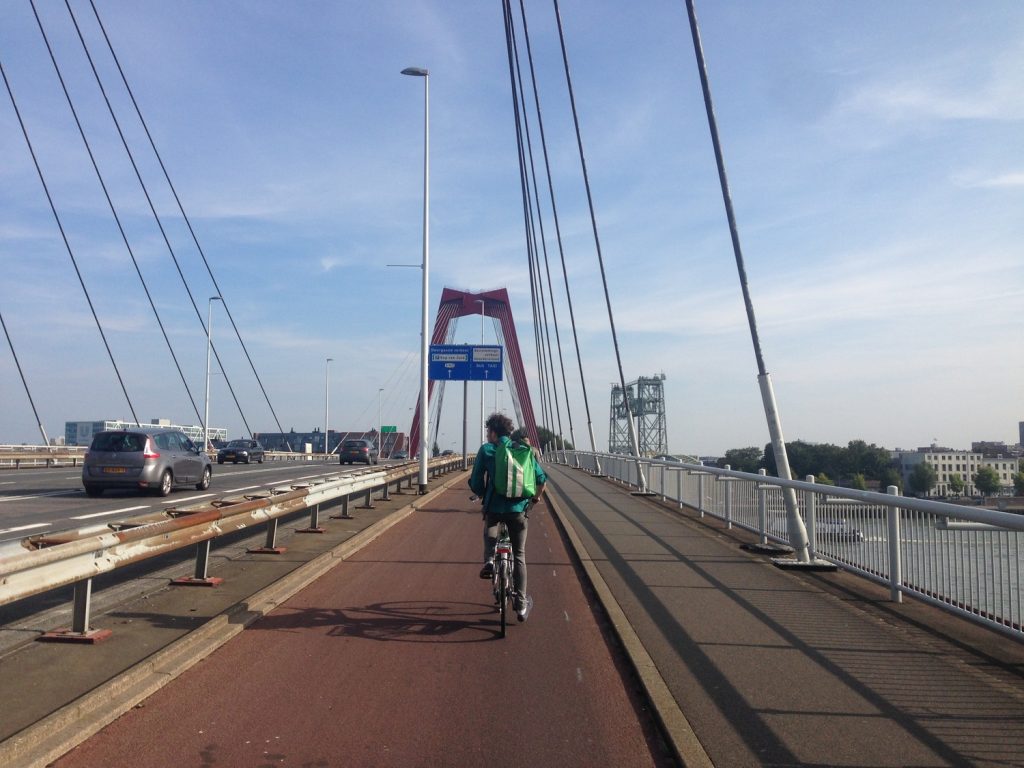 Cycling infrastructure, in my controversial opinion, should start with the intersections. The lanes are a distant second in priority. After intersections the money should go on excellent, city-wide, consistent signage, directing cyclists to the very many parallel quiet roads that are ready for use tomorrow. Once a continuous grid of legible routes covers the city, budgets should turn towards the construction of a cycling infrastructure network that reduces the space allocated to motor cars, enjoys priority over them, and provides the most direct and rapid route between a growing number of origins and destinations.

We have never, ever been a nation of car-owners. Yet that is all the infrastructure we have, and have had since the 1950s. The entire system is obsolete for almost everyone.

We cannot afford not to spend money on walking, cycling, trains, BRT and minibus taxi infrastructure. Money spent here is vastly better value than what is spent on roads-for-cars. There will never be safe walking, or any cycling, along ordinary roads unless limits are imposed on the many lethal freedoms motorists now enjoy.

Our roads are currently like monocrop farms: only one kind of thing flourishes there, at huge environmental cost, and a little wildness and biodiversity survives only in hard-to-reach corners

All roads in Cape Town have a character of highways. Speeds are far too high – the average speed on our arterial roads is one at which people walking, when hit by someone driving a car, have a very low chance of survival.

We can either have a city of roads-for-cars, or we can have everything else (including cars, at an appropriate level within a hierarchy of other modes). Our roads are currently like monocrop farms: only one kind of thing flourishes there, at huge environmental cost, and a little wildness and biodiversity survives only in hard-to-reach corners.

I am a white middle-class male in a time and place of heteropatriarchy, capitalism, and white supremacist power structures. I enjoy every possible type of privilege as I move through the public realm. Yet commuter cycling is often a terrifying experience, and my body is frequently endangered by design. That I choose this, when I have alternatives that are safer (albeit only for me; they imperil others) is an aspect of my privilege. The whole thing is hard to think through.

I love cycling so much that I often head out at night to ride around middle-class central Cape Town, for the sheer pleasure of using the infrastructure that exists, taking up my rightful place on the road, indicating properly, using my bike lights, interacting with vehicles as a vehicle while also being a thinking, sensing person, and receiving the stimulus of the city – aural, olfactory, visual, proprioceptive. This is literally my favourite pastime.

Our knowledge, experience and independence can co-create innovative ideas, projects, and cities with you.

research and consulting
Conducting active research across the fields of public spaces, non-motorised transport, design and architecture. This includes research through all stages of a project including : pre-feasibility, pre-design, design and post-design or monitoring as well as using experimental methods.
Previous experience:

tours and knowledge programmes
Conceptualising and developing tours and programmes related to the fields of architecture, urbanism, planning and cities. We have previously worked with a number of local and international universities, professional groups, designers, embassies, property developers, and economic development agencies
Previous experience :

creative events and conferences
We host events in the field of urbanism and sustainability, and also collaborate with various organisations to run creative spaces and support knowledge sharing.
Previous experience:

We share our knowledge and learnings with organisations and institutions interested in being exposed to a particular field of urbanism including advocacy strategies, public space projects, conference presentations and workshops.
Previous experience: