The office building Ferrum 1 (Block 16) stands on the historic site of the former Rossiya factory in St Petersburg’s Polustrovo district. Situated on the right bank of the Neva opposite the Smolny Cathedral, a palace for Prince Alexander Andreyevich Bezborodko was built in the middle of a spacious park on the site at the end of the 18th century according to designs by the Italian architect and painter Giacomo Quarenghi. For years, this country house was a center of social life. In the late 19th century, the park was a popular recreation and health resort for the upper classes of St Petersburg. On the border between the former garden of the palace and today’s Piskarevsky Prospekt there used to be a summer house, which was rented by the family of the famous Russian art theorist and painter Alexander Benois in 1877/78 and 1882. 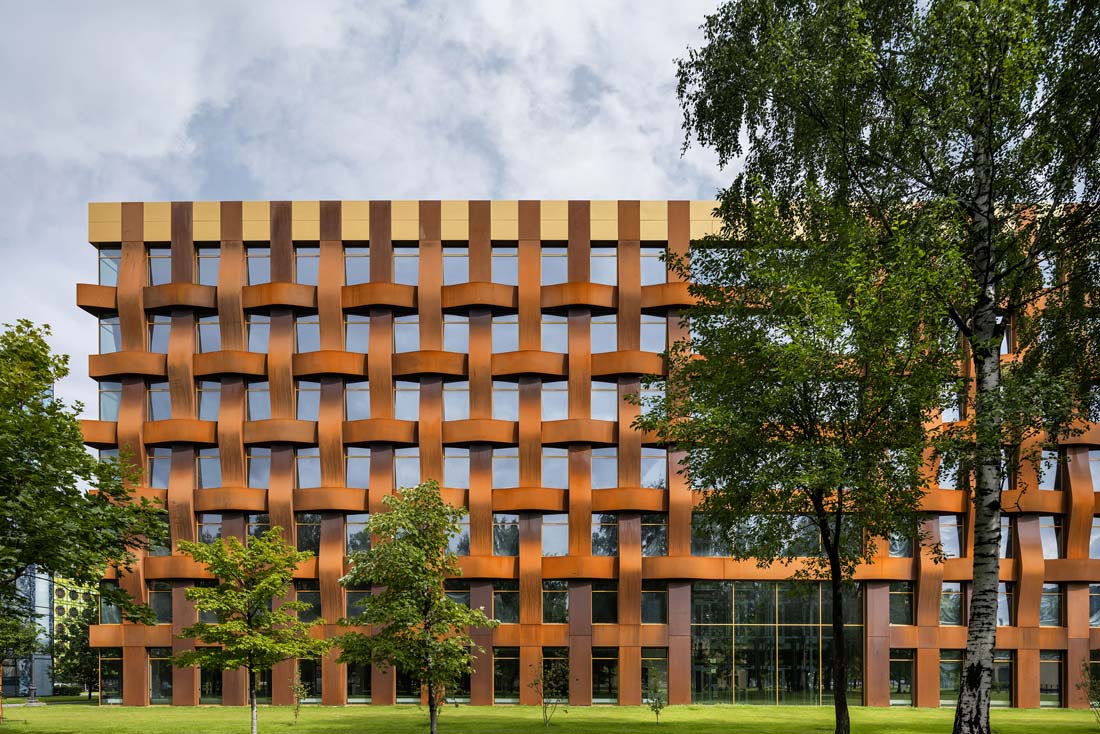 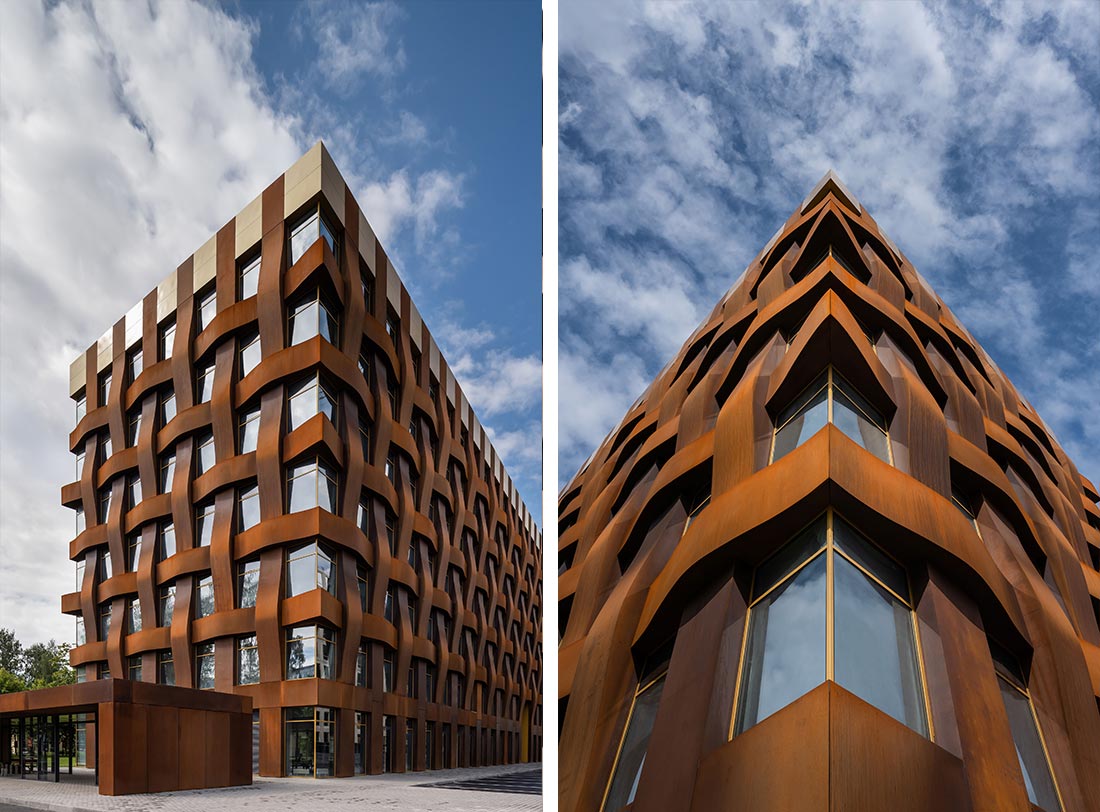 In 1911, in the course of the “industrialization of the entire country”, the Rossiya machine factory occupied large parts of the site, with production facilities, warehouses and administrative buildings. The former garden area was lost. The factory was closed down a long time ago, and the buildings, which were erected in the course of the factory’s expansion (some of them still unfinished), stood empty and began to decay. For more than 10 years now, the former industrial site has been undergoing extensive redevelopment under the direction of the development company Teorema. In the course of this, TCHOBAN VOSS Architekten have already built the multifunctional commercial campus House Benois (2008), the office complex Seasons-Ensemble (2013) and the residential complex Five Stars (2016) on the site. Opposite Ferrum 1 (Block 16), Ferrum 2 (Block 17) is being built with an identical façade solution and a landscaped inner courtyard. 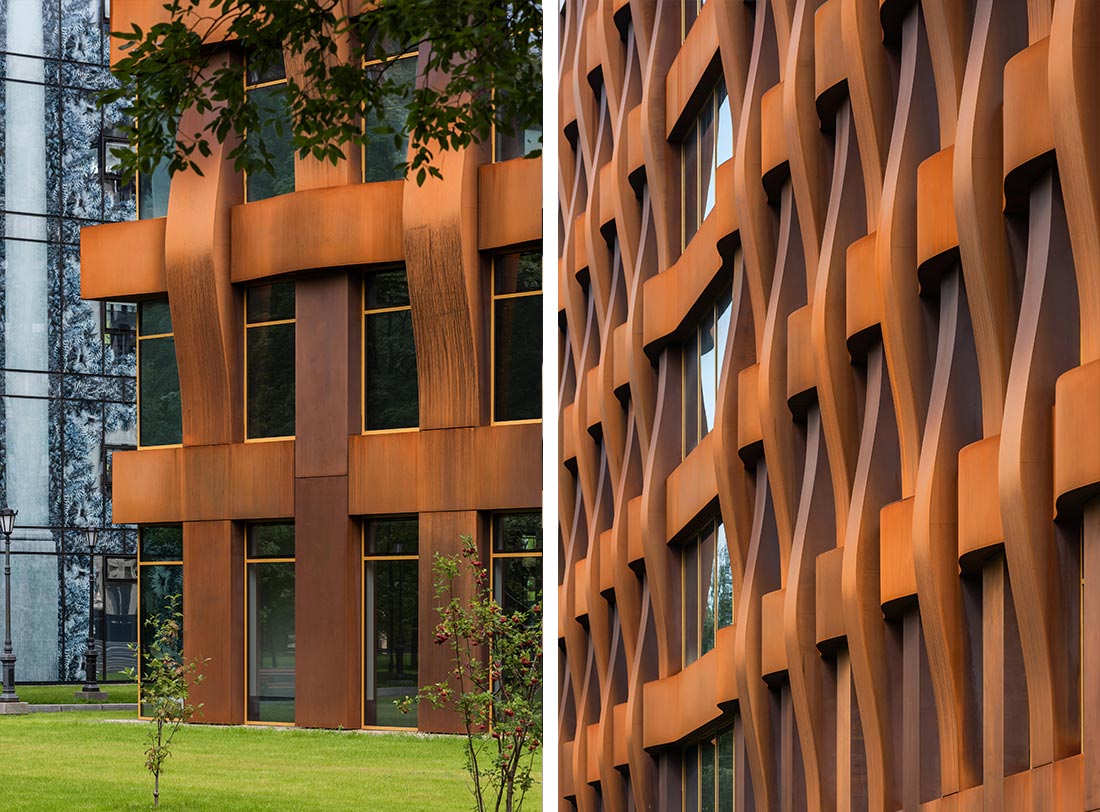 The seven-storey Ferrum 1 business center is one of the first buildings in Russia to be constructed with a sculptural Corten steel façade. This corrosion-resistant and extremely durable building material, with its characteristic rust-red patina and velvety texture, gives the building a particularly striking, expressive appearance. The theme of materiality, one of the most important aspects in architecture, was the focus when designing the façade. The name of the office building, “Ferrum”, Latin for iron, is a reference to the material structuring the façade, but also at the same time a reference to the history of the former industrial site on which the new building was erected. 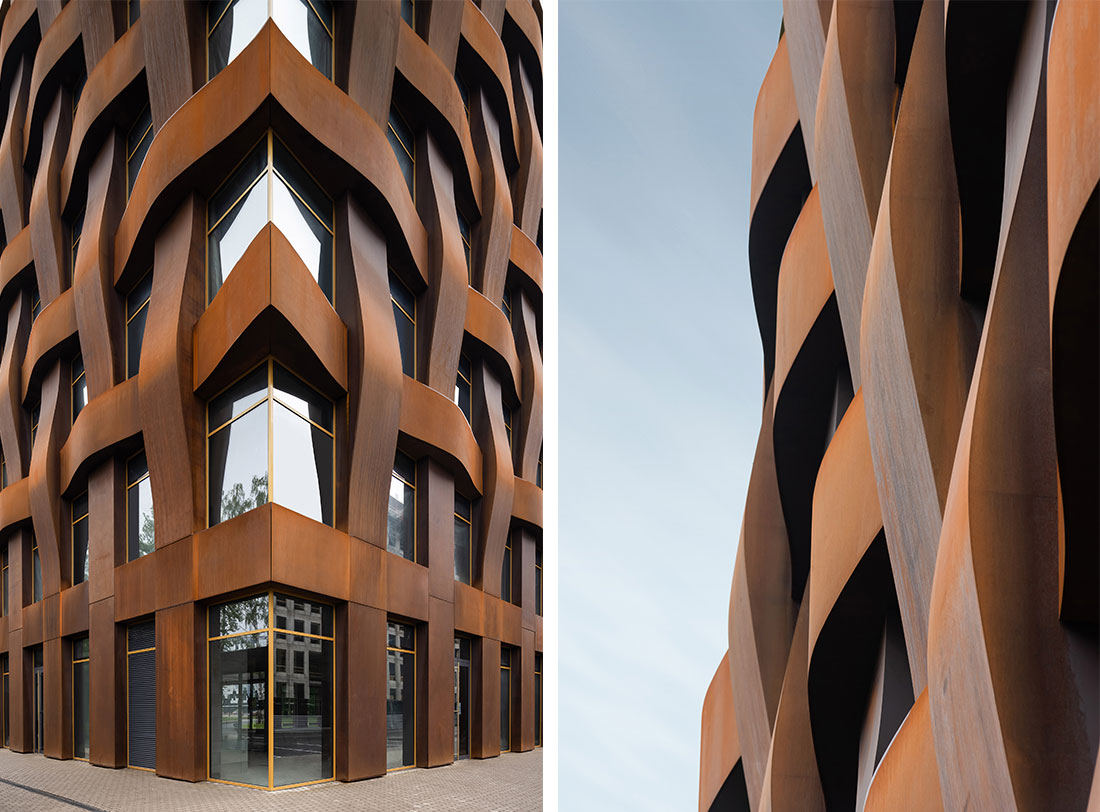 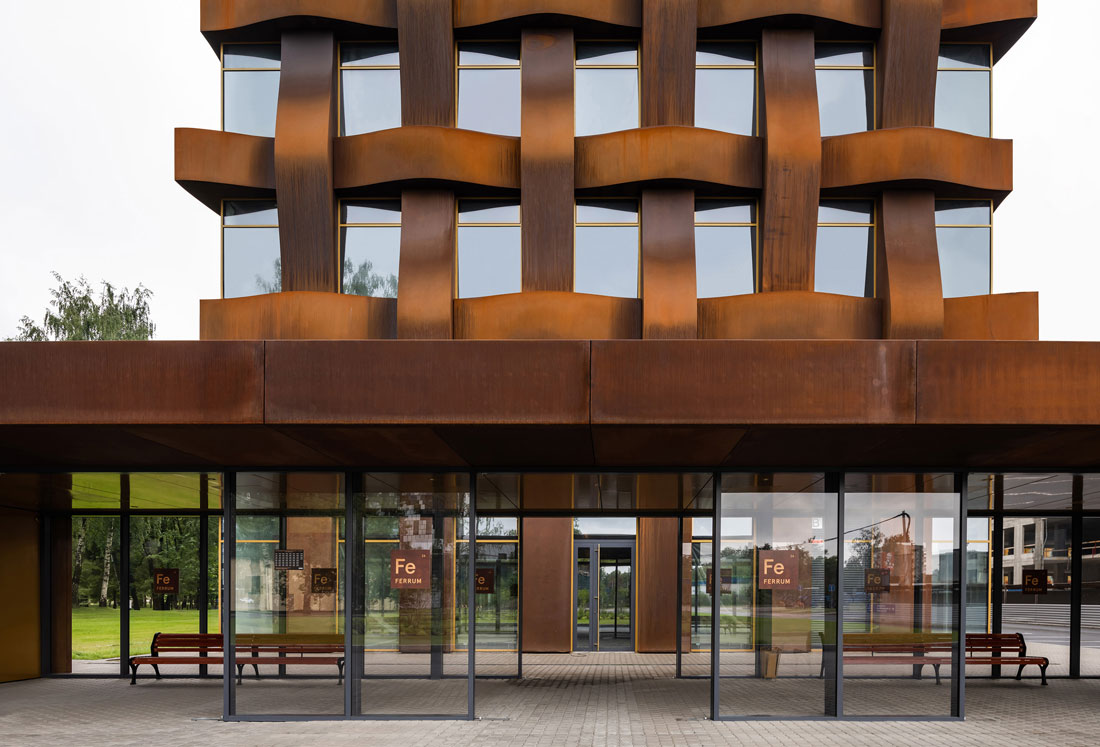 The sculptural façade is constructed in a geometric grid and presents itself as a coherent, dynamic, organically flowing fabric of loose “warp and weft” threads. Three-dimensional stripes span the rectangular building both horizontally and vertically. The alternation of flat and protruding modules creates the illusion of a plaiting. Viewed from the side, the horizontal lines at the intersections of the strips sometimes seem to dive beneath the vertical lines and vice versa. At the corners of the building, delicate structural glazing alternates with the sharp-edged folds of the Corten, thus the steel seems to play around a body of glass. The building is crowned by a band of golden aluminum panels, whose sheen visually offsets the intense coloring of the main façade cladding. “Rust on the outside, gold on the inside” is Ferrum’s central design theme. 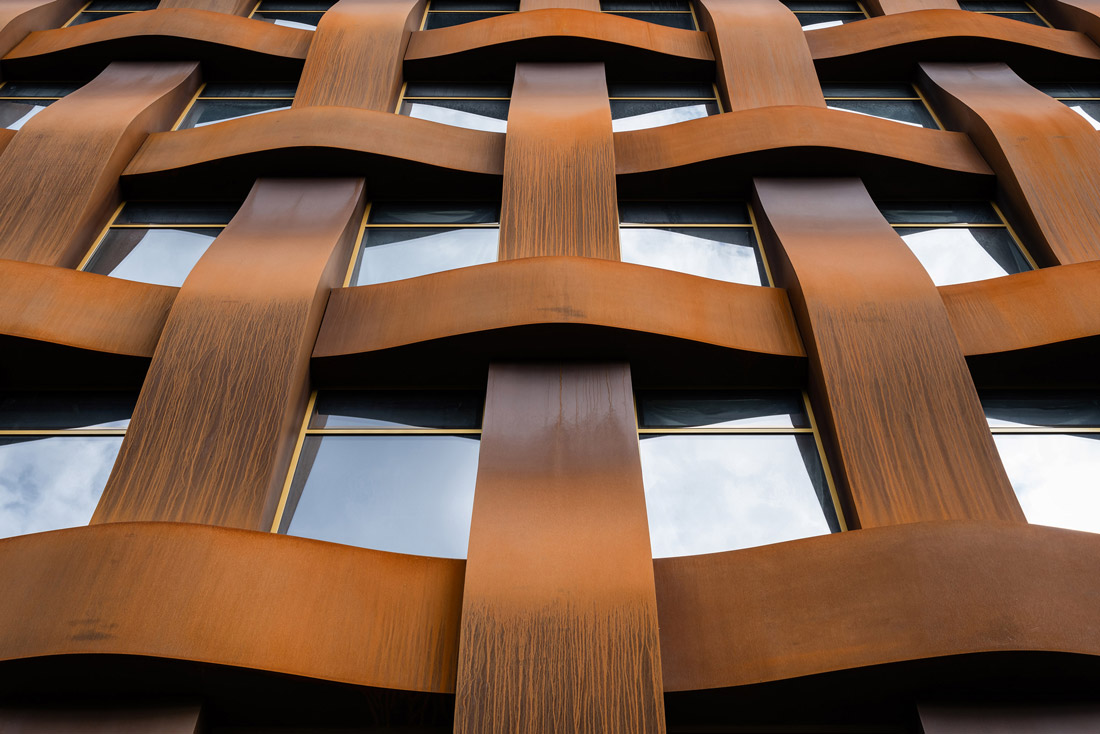 The building’s main entrance is marked by a large portal, and the central foyer features double-sided structural glass that fills this space with light and visually connects it to the surrounding park. The color design of all foyers follows a two-tone concept, with the theme of “gold on the inside” coming into play here. Thus, shiny gold doorways alternate with metal surfaces in cold grey. The wall coverings are made of printed glass. 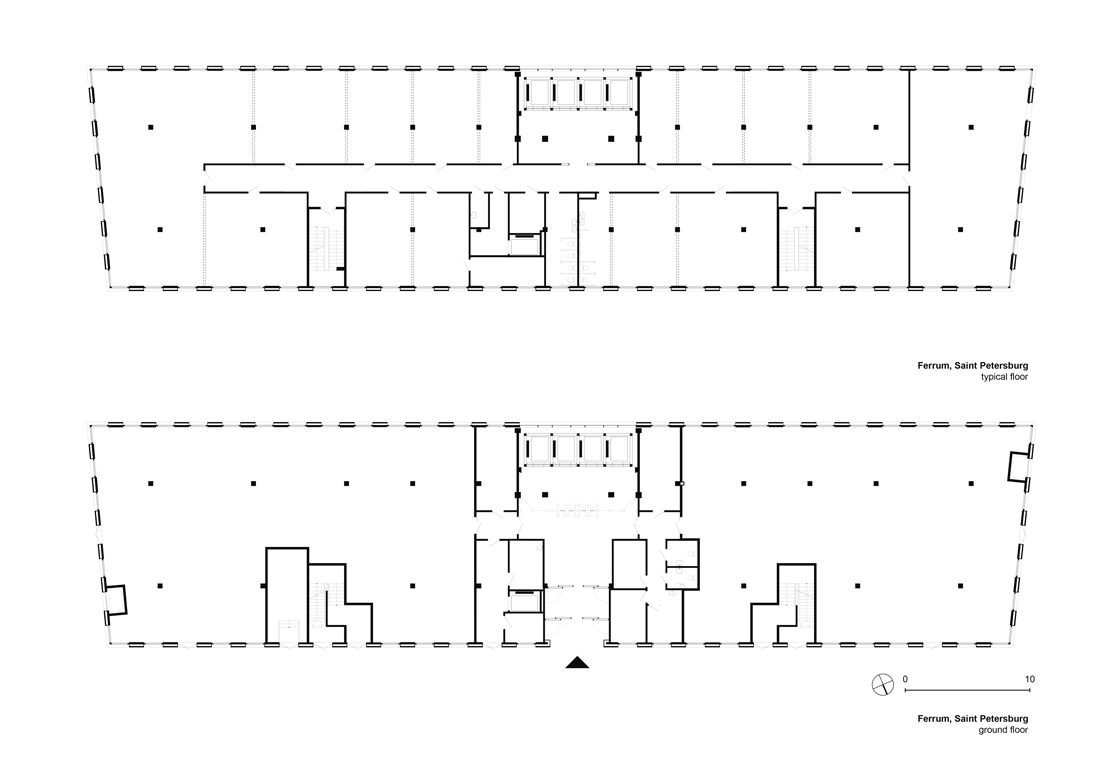