BB has received orders to supply gas-insulated switchgear (GIS) and shunt reactors to Red Eléctrica de España, (REE) the transmission agent and operator of the Spanish electricity system to support the upgrade of the electricity transmission infrastructure on the Canary Islands. The islands are part of an archipelago located off the coast of northwestern Africa, and one of Spain’s farthest-flung territories. They are also a popular tourist destination, renowned for their black- and white-sand beaches.

Designated a Biosphere Reserve by UNESCO, they consist of seven main islands and several smaller ones, all formed by remaining cones of extinct volcanos giving the islands their very steep and diverse landscape. The islands are most popularly known for their beaches and temperate climate and attract some 12 million tourists per year. With tourism accounting for 80 % of the archipelago’s economy, the reliable supply of electricity is vital. 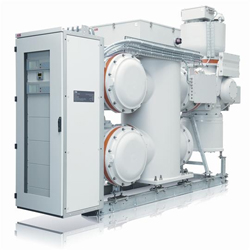 The Canary Islands transmission grid comprises around 1,350 km of power lines and 50 substations. Since 2011, REE has been working on the upgrade of the transmission infrastructure in the Canaries. The ambitious plans under the project name MAR (Improvement of Grid Assets) aim to adapt the electricity infrastructure to the quality of REE’s facilities on the mainland Spanish peninsula. They will also help to address existing infrastructure deficiencies and integrate the acquired assets into REE control systems, to secure electricity supply in the archipelago.

As part of this upgrade project, ABB will design, supply and commission 145-kilovolt (kV) and 72 kV GIS to be installed in three indoor substations located on the islands of Lanzarote and Fuerteventura. Upon completion in 2017, the GIS will enable an interconnection between the electricity systems of the islands. ABB’s robust and highly compact GIS technology can enable up to 90 percent space savings compared to air-insulated switchgear (AIS). Its significantly smaller footprint enables GIS substations to be hidden in buildings, thus preserving the surroundings in its natural state.

In a power system, switchgear controls, protects and isolates electrical equipment to boost the reliability of power supply. ABB pioneered high-voltage GIS in the mid-1960s and continues to drive the technology, offering a full range product portfolio with voltage levels from 72.5 kV to 1,200 kV. As a market leader in high-voltage GIS technology, ABB has a global installed base of more than 25,000 bays.

The project also includes the design, supply and commission of three shunt reactors 6megavolt amperes reactive (Mvar) 72kV and one 9 MVAr 132kV to be installed in the same indoor substations located on Lanzarote and Fuerteventura. Shunt reactors are low loss versions and will be used for compensating of capacitive power of submarine cables between Canary Islands. In addition to this project, ABB will support REE with their upgrade of the mainland electricity transmission infrastructure with seven single phase 200 megavolt amperes (MVA) 420 kV autotransformers.

ABB (www.abb.com) is a leading global technology company in power and automation that enables utility, industry, and transport & infrastructure customers to improve their performance while lowering environmental impact. The ABB Group of companies operates in roughly 100 countries and employs about 135,000 people.

@hd_cement's plant in Mokrá faced performance issues for more than three years. The cause of their problems was never discovered. Until they installed our #ABB_Ability™ Condition Monitoring on their drives. 👊 Find out more: social.abb/ability-heidel… #betterdecisions #technology pic.twitter.com/P4Y5DubrgA

@hd_cement's plant in Mokrá faced performance issues for more than three years. The cause of their problems was never discovered. Until they installed our #ABB_Ability™ Condition Monitoring on their drives. 👊 Find out more: social.abb/ability-heidel… #betterdecisions #technology pic.twitter.com/Y9V7alDdBc

Carlo Zwick´s sustainable House on the Lake near Potsdam, Germany, puts a spell on everyone who sees it. Witness breathtaking beauty, building performance and life quality at its best in a villa 3 meters off the ground. #ABB #technology #architecture #smartbuildings pic.twitter.com/guQpWNmXGZ